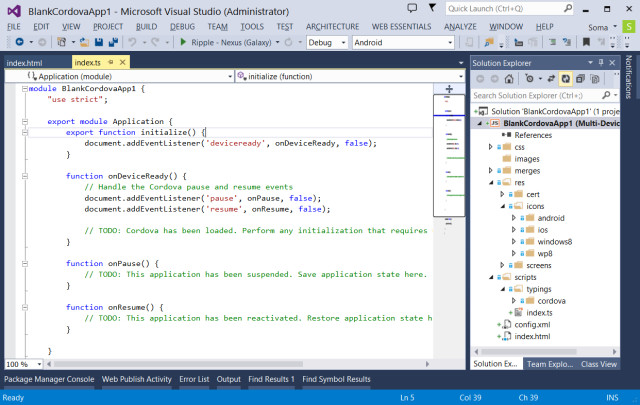 After releasing an early version of Visual Studio 2013 Update 2 in February, Microsoft has now launched the final build for software developers to download right now. Unlike Update 1, which was created mainly to fix bugs in Visual Studio 2013, this new download adds a number of new features to Microsoft's development tool.

In a blog post, Microsoft says that Update 2 adds support for building universal apps that will work in both Windows 8 and Windows Phone platforms. In addition, Update 2 finally adds official support for TypeScript, which is Microsoft's extension of JavaScript that's been in development for some time.

In a separate blog, Microsoft exec S. Somasegar writes quite a bit about Visual Studio 2013's new preview support for Apache Cordova, which is an open source platform for making mobile apps. He writes:

With the Cordova tools in Visual Studio, web developers can use their existing skills in HTML and JavaScript to create hybrid packaged apps for multiple devices while taking advantage of each device’s capabilities. These tools support end-to-end development of cross-platform mobile applications targeting Android, iOS, Windows and Windows Phone using Visual Studio.

Microsoft has also improved Visual Studio 2013's diagnostic tools, including a way to see all the information on a shared timeline.