Last month, it emerged that Microsoft was planning to relaunch its Office Web Apps with a new name and more prominence for the web versions of its productivity suite. Today, that change finally went live, with the launch of Office Online, and a collection of small but welcome improvements.

In a blog post, Microsoft said that the changes are designed to improve the experience of using these online programs, making it "easier to find, share and collaborate with others." Telling, the company also says it knows "that many of the one billion Office users haven't tried" its web apps yet, perhaps implying that the real reason behind the changes is that these apps are being used far less than Microsoft would like.

Microsoft's Amanda Lefebvre explained that the main motivation for ditching the Office Web Apps name came from customer feedback: "We heard from customers that the inclusion of Apps in our name was confusing. Are they something I install? Do I go to an app store to get them?" Office Online was seen as a far less confusing does-what-it-says-on-the-tin name for users to understand. 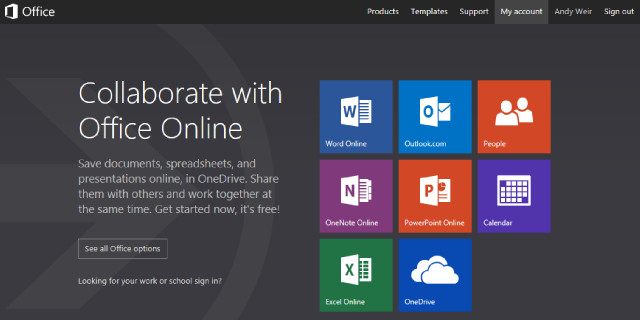 The second major component of today's changes is a new look for Office.com, with clearer signposting to the various apps available. When you visit that site, you'll see tiles directing you not only to Word, Excel, OneNote and PowerPoint, but also to Outlook.com, OneDrive, Calendar and People.

Those of you paying attention will recognise that the latter four tiles also feature in Microsoft's drop-down navigation bar (or 'app switcher', as Microsoft calls it) that features at the top of each of the sites for those services. While on Office.com, these tiles are available on the app switcher, but it is unclear if they will also be added to the same navigation bar on other Microsoft sites, such as Outlook.com and the newly launched OneDrive.

You can open an existing document, or create a new one using any of the four Office Online programs. Launch one, and things won't look much different from the pre-existing Office Web Apps, including OneNote Online, which saw its own updates a few weeks ago.