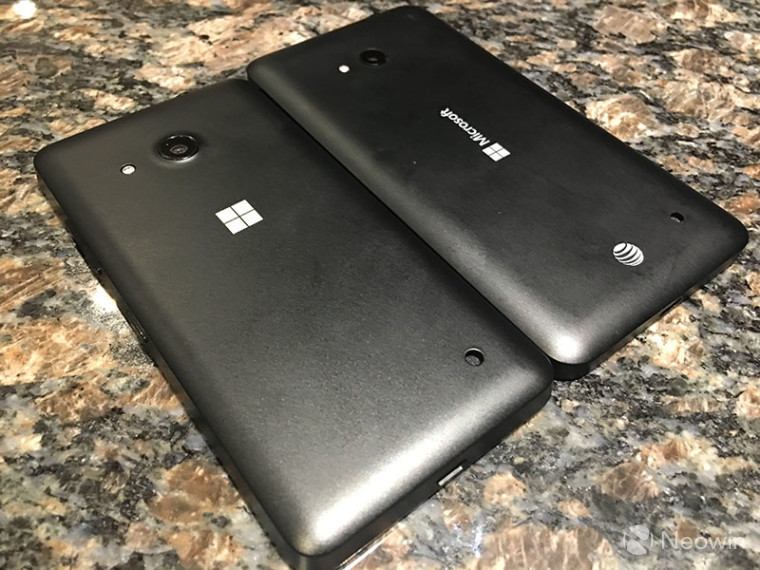 You could have blinked and missed it, but when Microsoft launched their long awaited flagships last October, they also announced a budget offering, the Microsoft Lumia 550. After all, the Lumia 550 is one of three launch devices for Windows 10 Mobile. Being a budget device, it's surely not as exciting as its flagship counterparts.

But now the Lumia 550 is in stores and it has to stand up to other devices on the budget end. Here in the United States, no carrier sells the Lumia 550, so the only way to get it through official channels is from the Microsoft Store for $139.

Of course, that Lumia 550 sits on a shelf right next to the Microsoft Lumia 640. The Lumia 640 doesn't come in an unlocked model here in the United States. There's only an AT&T model, which sells for $29. There's no contract or any other kind of subsidies. It's just a $29 smart phone, and a pretty darn good one.

Of course, AT&T makes it pretty easy to unlock a phone. All someone needs is to be an AT&T customer or a former customer (or know someone who is or was a customer). As long as the user doesn't owe AT&T any money for the phone, the firm will unlock it.

Snapdragon 210 was upgraded from Snapdragon 200 to be more like the older Snapdragon 400, adding features such as LTE support, a better GPU, and 1080p video playback support.

The small difference in clock speed proves to be a notable difference, as we'll see later in benchmarks. We'll also see more about that when we compare the Lumia 550 to the Lumia 650, as the only difference between Snapdragon 210 and 212 is 0.2 GHz of clock speed.

As far as aesthetics go, these two devices are extremely similar. Their displays are both 720p IPS LCD; however, the Lumia 640 is a bit larger at 5", leaving it with a lower pixel density.

The lower pixel density is an important note. Apple defines Retina on a phone as 326 ppi, meaning that a user with 20/20 vision, at an average viewing distance, can't tell the difference between that and anything higher. I tend to agree with them.

While that comment is sure to spark some debate, I would note that there are of course displays that are better than Apple's 750p display in the iPhone 6S, such as the Galaxy Note 5; however, I don't attribute that to a higher resolution. Samsung uses Super AMOLED, which is one factor, and they're extremely good at it, so their displays have amazing color accuracy.

Heading back on track, it's important to note that 326 ppi is the number, because once the number goes lower than that, it's easier to see pixelation. While it's not an astronomical difference, I think it's safe to say that the Lumia 550 has the better display.

The bodies are also very similar. In the few weeks that I've been reviewing the Lumia 550, I've gotten it mixed up with the Lumia 640 quite a few times. The only way to tell the difference is to look at the back, or to note that the Lumia 550 is a bit smaller.

As we can see from the specs, the Lumia 640 clearly has better rear camera hardware than the Lumia 550. It has a higher resolution and a larger aperture with the same sensor size.

The Lumia 550 seems to do for the Lumia 5xx line what the Lumia 640 did for the Lumia 6xx line. As I mentioned earlier, it adds Glance. It also adds Rich Capture, a feature that allows the user to adjust exposure after the image is captured.

My usual disclaimer: all benchmarks should be taken with a grain of salt. Benchmarks rarely provide any insight into real world performance. People want to see them, so I provide them, but that's it.

First up is the old AnTuTu beta from 2012. It's an app that I've been using to compare Windows phones for years. The scores aren't comparable to the Android or iOS versions of AnTuTu, but let's just call this legacy support. 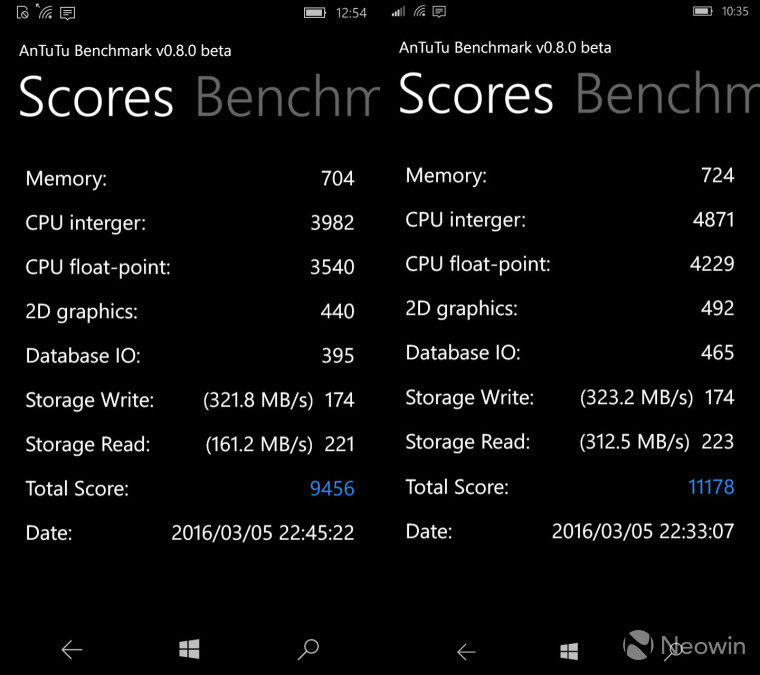 As we can see, we get much better scores from the Lumia 640. I didn't expect it to be this bad, considering that the only difference between the two CPUs is a measly 0.1 GHz per core and nothing else. Also, as we saw from yesterday's comparison between Lumia 640 and 650, Snapdragon 212 outperforms Snapdragon 400.

Next up is AnTuTu v6. Also a beta app, this is newer, more comparable to its Android and iOS counterparts, and it's made for Windows 10. If the other AnTuTu app is legacy support, this is UWP. 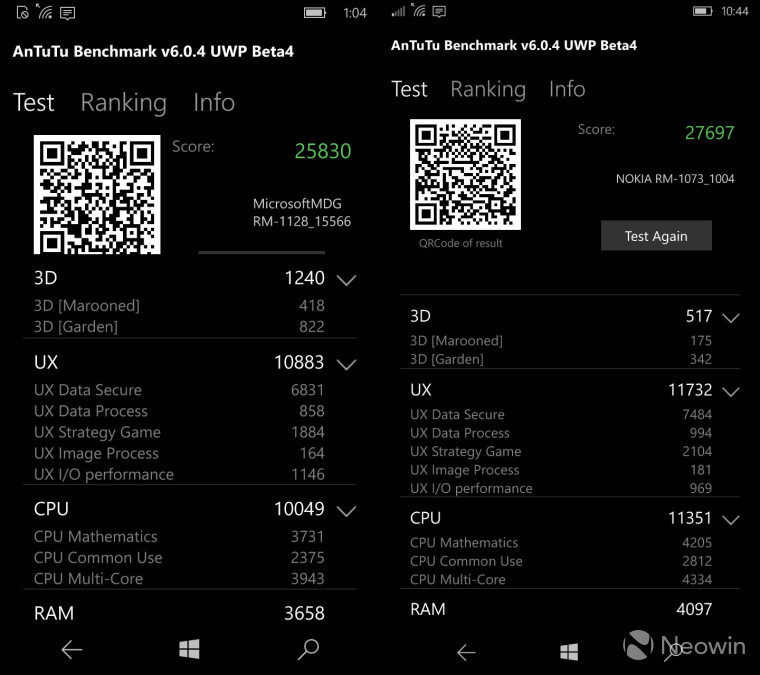 The CPU results are the same, but we're also seeing something else that we saw in yesterday's comparison. In the AnTuTu test, the Adreno 304 GPU seems to outperform the Adreno 305, which should be a difference of 400 MHz and 450 MHz, respectively.

When one speaks of GPU performance, the next test to bring up is GFXBench. GFXBench also has a rather old Windows Phone app. You'll see that the first test says that it's based on DirectX 9.1. Sadly, when dealing with Windows phones, you deal with a lot of deprecated apps; however, it's fantastic to see so many companies working hard on UWP apps such as AnTuTu and Instagram. 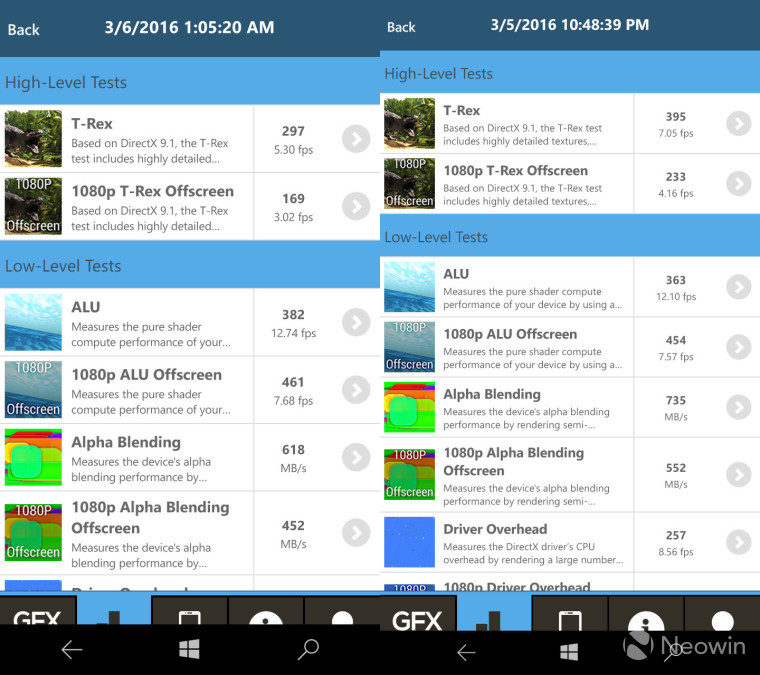 As we can see here, the graphics tests can go either way.

Finally, we have tests from WP Bench, an app that's obviously available for Windows phones only; however, they provide a test that's easy to understand. 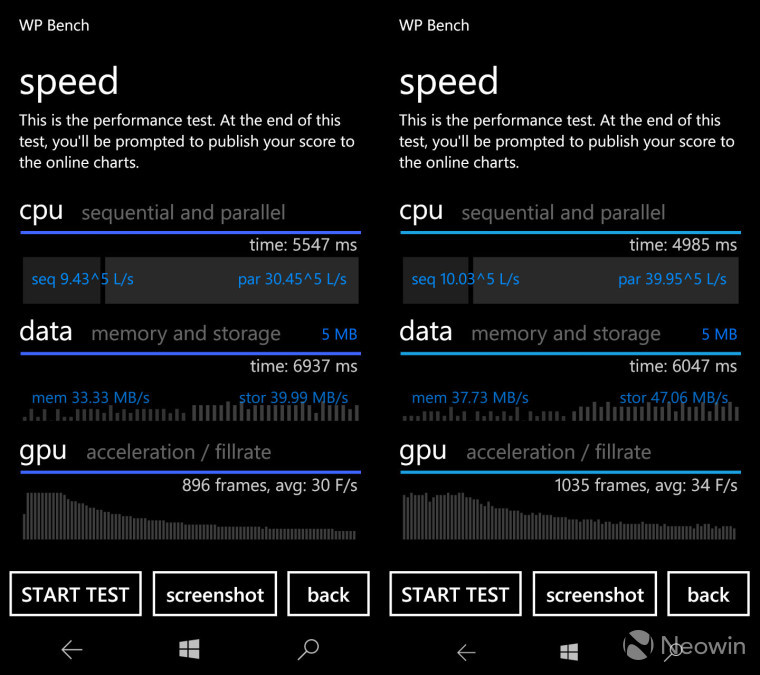 As we can see from all of the tests here, we've seen some show that one CPU was better while the other showed the opposite. The same goes for the GPU. This is why I don't judge phones by benchmarks.

Looking from the outside, these two phones look almost the same. They have the same body, the same resolution display, and they both exclusively come in matte black if you buy them in the United States.

They both use Glance and support Rich Capture. So, which one is better?

Obviously, the Lumia 640 is the better device. Every device that I've reviewed that uses Snapdragon 210 seems to be just a bit too underpowered and that's no different with the Lumia 550.

Let's not forget, if you're in the United States, you can grab the AT&T Lumia 640 for just $29 with no strings attached. It's also really easy to get it unlocked. It's a no-brainer.

If you're outside of the United States and pricing is a little more reasonable, the Lumia 640 probably costs a bit more than the Lumia 550. I can't tell you how important your money is to you, but the Lumia 640 is a solid contender where the Lumia 550 falls short.