Microsoft is apparently experimenting to bring the tabbed experience that we generally see on browsers to other apps in Windows 10. The new experience is being worked on at the OS level and has been dubbed internally as "Tabbed Shell". A mock-up of how it could look like on File Explorer can be seen below: 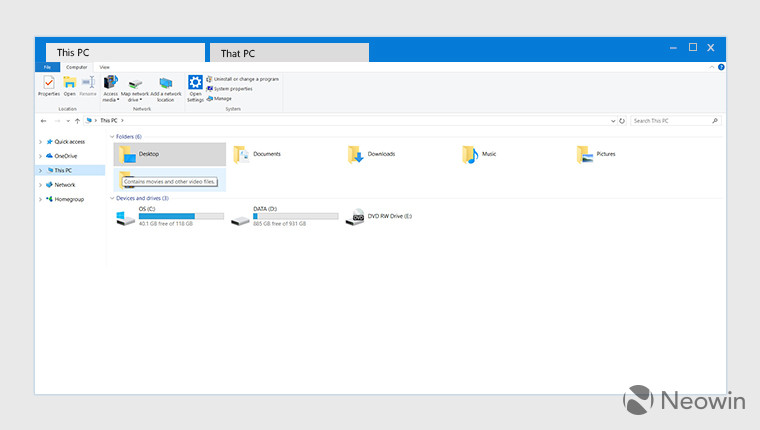 The feature allows users to take advantage of the tabbed model of browsers in their favorite apps, without the developers putting in any extra work. Sources say that this is being actively worked on for apps such as File Explorer. Microsoft will also offer "tabbed shell" APIs to developers so that they can incorporate the experience into their apps.

According to Windows Central, an app that isn't optimized for tabs will likely display two sets of controls, titles, and icons. The main objective of this addition is to unify the user experience across all apps on the platform. The feature is still in its early developmental stage. It is still unknown whether the functionality is due to arrive in Redstone 3 or Redstone 4.

Of course, it could be killed even before it comes to the public like Microsoft did with Project Osaka. Reports suggest that the company is still working out various user experience scenarios for the functionality, like how to handle multiple instances of the same application. With BUILD getting ever closer, we expect the company to shed some light on "tabbed shell" and when to expect it.