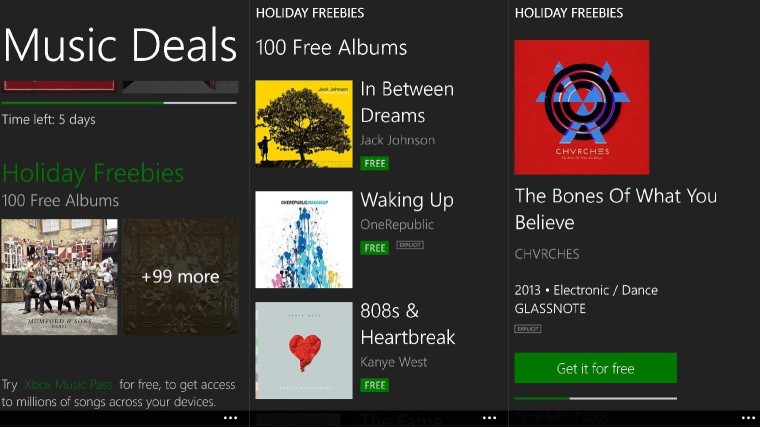 Recently, Microsoft decided to show its spirit of giving through an excellent promotional offer that offered fifty free music albums. Free music is good, so the only logical way to one-up a free promo is to offer more for free, and Microsoft has done just that.

The Music Deals application is now showcasing 100 free albums from various artists that are up for grabs to anyone with the Xbox Music and the Music Deals apps. Users interested in taking a look at the full catalog should start by browsing the "Holiday Freebies" section within the Music Deals app. When you find albums you'd like to download, select them and you'll see a "get it for free" button that will link you to the album within Xbox Music. Clicking on the price (which should show up as "get it free" while the promotion lasts).

A few of the new albums offered as part of the promotion on top of the previous 50 include:

As we previously reported, only residents within the United States will be able to gain access to the promotion (due to licensing and copyright laws). The deal for 100 free albums runs until December 15, and if you're looking for a good bargain on more than just music, be sure to check out Microsoft's 12 Days of Christmas countdown for sales that are already underway.