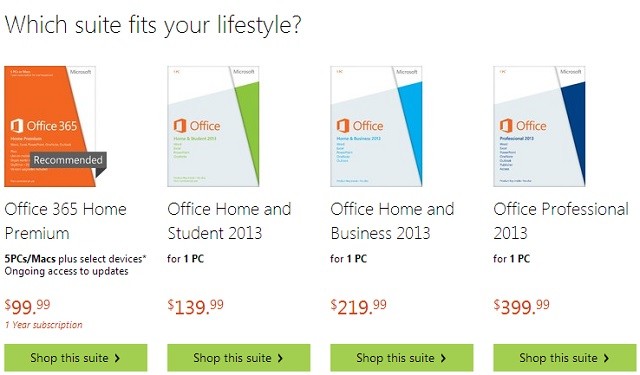 As everyone expected, Microsoft Office 2013 is now on sale in the United States following launches in other territories (including Australia) several hours ago. Prospective buyers can head to the online Microsoft Store to purchase their copy, with prices as previously expected: Home And Student retails for $139.99, Home and Business is going for $219.99 and there's also a full "Professional" SKU for $399.99.

On the Office 365 front you'll be paying $99.99 for a 1 year subscription, which includes copies of all the applications available in the Professional SKU, and is licensed for use on up to five computers. Don't forget there are several other ways to get your copy of Office 2013, including the Home Use Program for just $9.95 (if you're eligible), as well as through TechNet or MSDN if you have an appropriate subscription.

If you'd rather get a boxed copy direct from a retailer, expect Office 2013 to be available in-store today including in physical Microsoft Stores. Also be on the lookout for a launch event tonight in New York's Bryant Park which will complete the Office 2013 launch process.