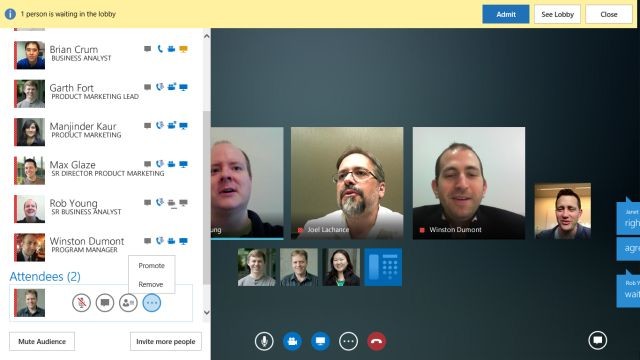 In December, Microsoft updated its Lync app for Windows 8 so it would work with Windows 8.1. Today, the company released a new update for the app that contains quite a few new features for the business-themed messaging and chat program.

The official Lync blog states that the app update now includes a way to manage Lync meeting participants either individually or as a group. The blog says:

You can mute a participant, send a private IM, view their contact card, promote to presenter or demote to an attendee. You can also invite more participants, mute all audience, and admit people to the meeting who are waiting in the lobby.

In addition, the app now puts the conversation control icons at the bottom of the screen. User can access them to mute and unmute audio, view the meeting participants, start or stop video, or leave the chat. There's also a new Meet Now feature that lets folks start up a Lync meeting immediately, rather than schedule one in advance of its date.

Windows 8 Start screen users can now pin a list of upcoming Lync meetings to a tile with this update. There's also a way to Pin the Join or Meet Now features on the Start screen as well. Finally, the update fixes a bug that was keeping some Lync users from signing into the app.