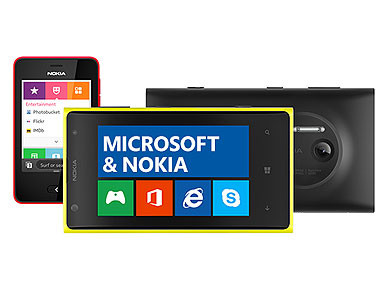 The dual press release from Microsoft and Nokia reveals that Microsoft will spend a total of 5.44 billion euros in cash, or $7.17 billion on the deal. That includes $4.99 billion for the business and another $2.18 billion for Nokia's patent licenses. The deal is expected to close in the first quarter of 2014, pending approval of Nokia's shareholders, regulatory approvals and other closing conditions.

The press release says that when and if the deal is closed, about 32,000 of Nokia's employees will become Microsoft team members, including 4,700 people in Nokia's home in Finland. Microsoft will now acquire the Lumia brand of smartphones that were already using Microsoft's Windows Phone operating system. Nokia first announced that it would use the Windows Phone OS back in February 2011.

Microsoft will also take charge of Nokia's Mobile Phones business unit and its budget priced Asha lineup of smartphones, but will license the Nokia brand to sell those phones. Nokia will continue to own and manage the Nokia brand.

As far as the patents deal, Microsoft has been granted a 10 year agreement to use Nokia' patents, along with another four year deal to use Nokia's HERE mapping services. Nokia will also get the rights to use Microsoft's patents for its HERE services.

Current Nokia President and CEO Stephen Elop will resign immediately from his position and become the company's Executive Vice President, Devices & Services. Nokia's current chairman of its board of directors Risto Siilasmaa will take over as interim CEO. Elop and other members of Nokia's leadership are expected to become team members of Microsoft when the deal is closed.