Sometimes when people are traveling with their smartphone, they take photos of things like shopping labels, signs and other objects with lots of text so they can read them later. Today, Microsoft has announced that a new collaboration between their Bing and SkyDrive teams has resulted in a new SkyDrive feature that will make reading texts in images much better. 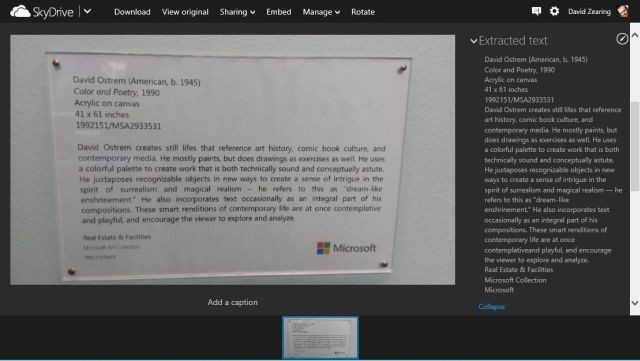 The technology that was used by the Bing and SkyDrive teams is called optical character recognition, or OCR. In a post on the official SkyDrive blog, Microsoft explains how this will work, stating, "With this new SkyDrive release, our OCR tool will automatically run on your camera roll photos so you can instantly see the extracted text whenever you view your photos on SkyDrive.com."

As you can see in the above photo, showing the description of an art piece, the text inside that label can now be read more clearly in the photo's properties pane. At the moment, the feature works only with English, Portuguese, Spanish, French, and German, but it does support most image formats. Microsoft says this is just the first salvo in a series of new SkyDrive features that will be designed to make photos stored on the service "smarter."