Co-owner file support, which has been rumored as coming to Microsoft's SkyDrive for several months, may soon be added as part of the rebranding of the cloud storage service to OneDrive. 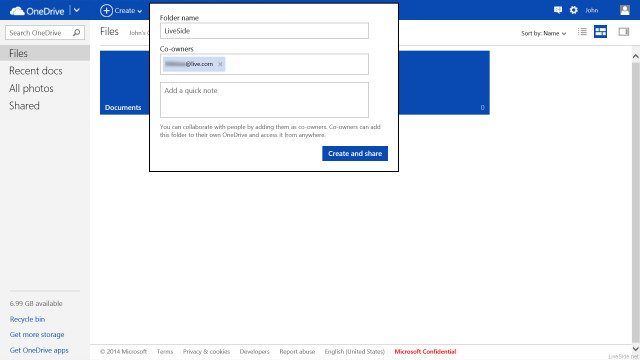 Liveside.net, which has broken a number of stories about upcoming features for SkyDrive, has posted what it claims are the first screenshots of the OneDrive.com website. They also show off a feature that's not currently a part of SkyDrive which will allow users to give other people "co-owner" access to files.

The article quotes a Microsoft explanation of this feature, saying:

Co-owners can add, edit, and delete files, and invite people to a folder. You can collaborate with people by adding them as co-owners (to a folder). Co-owners can add folders to their own OneDrive and access it from anywhere.

So far, Microsoft has not announced plans to introduce this feature into OneDrive. The company has also not given any guidance on when the switch over from SkyDrive to the new OneDrive branding will begin. However, the recently leaked builds of Windows 8.1 are already using the OneDrive branding, which may indicate that Microsoft will rename the service by no later than this spring.