With a rumored launch date in August, the leaks are coming in at a feverish pace in regards to Samsung's upcoming Galaxy Note7. The handset will be the sixth iteration in the Note series, with Samsung opting to skip to "7" to align the handset with its Galaxy S line. According to a new leak on Weibo, it looks as though the new handset could tout a whopping 256GB of internal storage with the option of expanding via microSD. 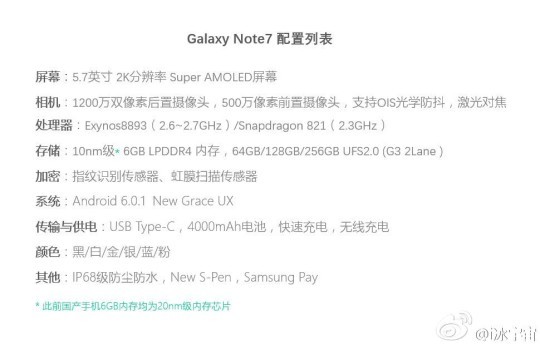 If the leak is to be believed, along with the larger storage option mentioned above, the new handset will offer a slightly faster processor with the Snapdragon 821 or Exynos 8893. As expected, the Note will also pack more power, offering a larger 4000mAh battery, with charging via USB Type-C. The rest of the specifications in the leak seem to line up with what has been previously reported, like the 5.7-inch display and a newly revamped UX.