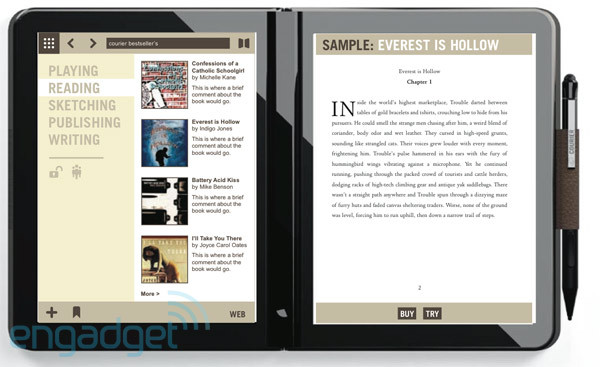 Remember Microsoft's new tablet concept that was revealed last September? Well, the book-like Courier device - or "digital journal" as it has now been labelled - may be on the shelves as early as the second half of this year, according to new information leaked to Engadget.

The Courier looks like it will be set up in a direct battle with the Apple iPad. It has been designed to be a very portable and mobile device with a weight of just over a pound and a thickness of under an inch. When closed its footprint will be a little larger than a 5" by 7" photo.

Unlike previously believed, the device isn't based on Windows 7 and instead will run a similar mobile operating system to that used on the Zune HD, Windows Mobile 7 Series and the recently confirmed "Project Pink" devices, why could suggest use of Microsoft's Metro UI. As with the Zune HD, the Courier is expected to use a Tegra chip.

The Courier will also include a built-in camera, headphone jack and stylus, the latter to support its pen-centric interface, which is also designed to include finger touch and gesture controls. The device will feature handwriting recognition and be based around writing and drawing, and could also include e-book support, providing Microsoft's offering to an ever-crowded market.

Said to be led by J Allard -  the Microsoft executive who was involved in the original Xbox and Zune teams - the project has been kept fairly secret for a while now, but Engadget's source has given a possible launch date of Q3 or Q4 of this year. They didn't, however, provide any indication of the price. Gizmodo report that their sources have indicated that it won't appear any time this year.

Two videos of the Courier's interface have also surfaced. One is included below or head over to Engadget to check out the other, along with new pictures of the device.