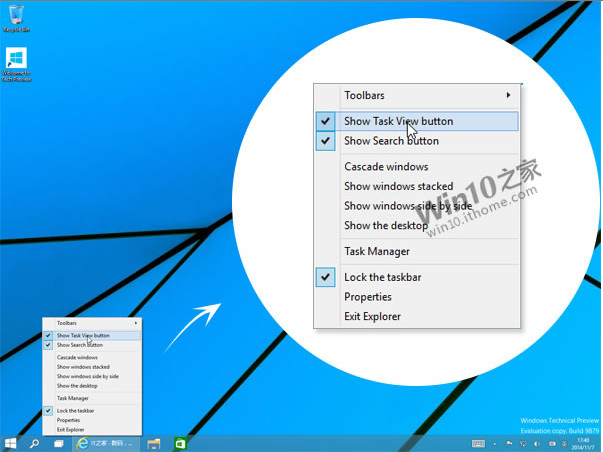 One of the new 'features' that is included with Windows 10 Technical Preview are the multi-tasking (virtual desktop) and search buttons that are in the taskbar. In the current release of Windows 10, these buttons are permanently in the bar and cannot be removed.

Thankfully, in upcoming builds, you will be able to remove these items if you have no use for them. Thanks to screenshots from build 9879, you can see in the image at the top of this post that shows how you can remove these two buttons.

It's a small addition to the OS but one we suspect many users will appreciate because if you don't use either of these functions, then they take up space on the task bar with little value.

That's not the only feature that is coming in the new builds as the notification center button likely will move further to the right and in some builds, we have started to see new lock-screen functionality too. But, we are not sure if the new lock-screen features will make it in to the next technical preview build.

And about build 9880, our forums (and our tip box) has been going nuts saying that this is the next public release. At this time, the build has not been distributed to the core testing groups that are the last to receive the build before it is released to the Insiders program. This build still could be the next release but the steps taken to release 9841 and 9860 have not occurred internally (yet) to make this build available to everyone.

Image Credit: IThome | Thanks for the tip Greg!