There are many exciting features that have been unveiled with regard to the 3DS. However, there may soon be a feature that sparks intense debates. According to N4G via GameRant, “During a recent shareholder’s meeting, Satoru Iwata, CEO of Nintendo, revealed that Nintendo is working on a system that may prohibit young gamers from playing their 3DS excessively.”

During Nintendo’s Investor Q&A, Nintendo President Satoru Iwata was asked by a worried parent what Nintendo’s recommended console usage is. The parent went on to state that he had set limits on the amount of time that his son could play video games, but that the limits had absolutely no effect.

Iwata responded by talking about a recent study that Nintendo had completed. The study was designed to determine how socially acceptable gaming is as an entertainment medium. According to the chart that was presented, gaming does appear to be lagging behind most other forms of entertainment. The chart can be seen below. 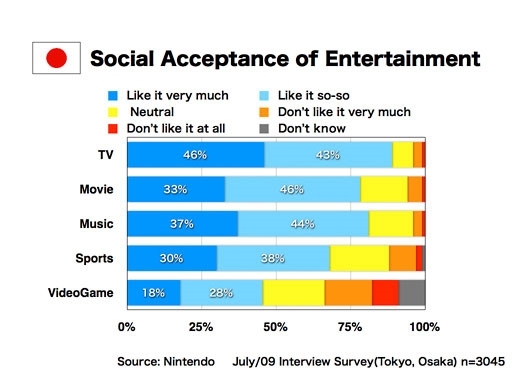 Iwata went on to reveal that Nintendo seriously considered adopting a function which would force a game to stop in order to prevent children from playing further. The time that the game would stop would have been determined by parents. However, Nintendo eventually decided that it was better to integrate a gameplay time recording feature.

The feature was designed to encourage parents and children to communicate so that a compromise could be reached. The feature wasn’t included in the Nintendo DS due to the fact that it had been developed just two years prior to the Wii. Despite that fact, it now appears to be making a comeback in 3DS.

Iwata stated “[…] in the case of Nintendo 3DS, we are contemplating incorporating some kind of system. Whether it will be similar to the one for Wii or we may add something more has not been decided [...] Nintendo is seriously considering such measures – probably the most earnestly in this industry. Our arguments are so serious that people might be surprised if they were aware that a video game company like Nintendo is having such arguments internally.”

This feature shouldn’t be a major concern to Adult gamers -- who can easily reason when it is a good idea to stop playing. The most important impact that this feature may have could be the fact that it may push gaming as a socially relevant form of entertainment. If it succeeds, it will be a great benefit to the industry.