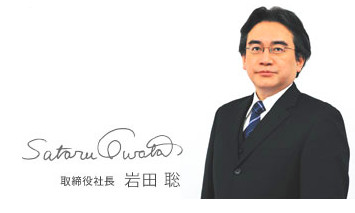 Today, Nintendo announced the sad news that CEO and President of Nintendo, Satoru Iwata, had passed away on July 11th, 2015.

Iwata began his gaming career as a programmer for HAL Laboratory which has been known to work very closely in the past and present with Nintendo on a variety of well-known and high profile projects.

After quickly ascending the ladder at HAL, he left and joined Nintendo in 2000. In 2002, Iwata became Nintendo's fourth president. During his time at Nintendo, Iwata has been involved in many of Nintendo's successful projects and even took over as CEO of Nintendo of America in 2013.

Nintendo did not go into detail of how Iwata passed, but it did list that he had passed away on July 11th, 2015 due to a bile duct growth. Naturally, this is a time for mourning and the loss of Iwata will certainly resonate heavily for many people.