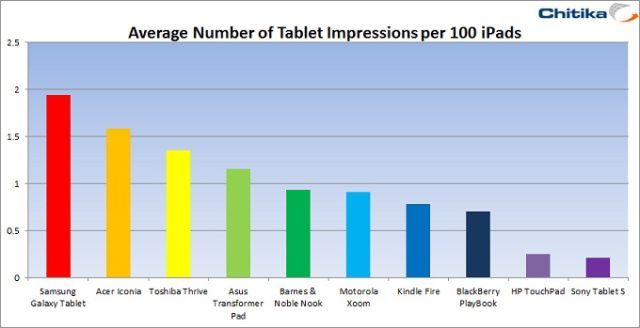 Neither Barnes and Noble nor Amazon have ever issued specific sales figures for their Nook and Kindle Fire tablets (Amazon has only said it has sold "millions" of its Kindle devices since the Kindle Fire launched last fall). Today, a new report from Chitika Insights claims that web traffic generated from the Nook tablet has now exceeded that of the Kindle Fire, which may mean that the Nook itself may have overtaken the Kindle Fire in terms of sales.

Chitika Insights says it took a sample of hundreds of millions of impressions from its Chitika Ad network from June 4-10. The report states:

Compared to our previous study of tablets per 100 iPads, the Kindle has maintained its share while the Nook has gained. Barnes & Nobles’ e-reader with tablet capabilities now accounts for 0.85 (percent) of all tablet web traffic versus Kindle Fire’s .71 (percent).

That's good news, at least indirectly, for Microsoft. In April, the company announced a partnership with Barnes and Noble that will see the Nook business spun off into a separate company, with Microsoft investing $300 million in this new, and still unnamed, venture.

Apple's iPad is, not surprisingly, at the top of the tablet web browsing list, claiming 91.07 percent of tablet web traffic, according to Chitika Insights. However, that number is down from 94.64 percent compared to a May report. The Samsung Galaxy tablet lineup is still number one among non-iPad tablets for web market share. The report adds, "With Windows 8 tablets expected in the fourth quarter, the future of tablet web traffic will certainly be interesting to observe."