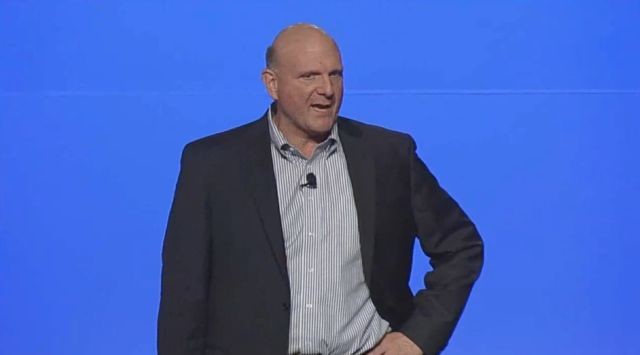 Steve Ballmer announced his plans to retire as Microsoft's CEO a few weeks ago and ever since then, many members of the media have offered their opinions on Ballmer's long history in running the company. Some of those viewpoints have been quite harsh, and a few have called Ballmer the worst CEO ever.

On Thursday, Ballmer appeared on stage at the company's financial analyst meeting to address the crowd in Bellevue, Washington. Perhaps as a way to answer those people who have been critical of his leadership of Microsoft, Ballmer showed a slide to the analysts that listed various financial numbers of Microsoft and six of its competitors. 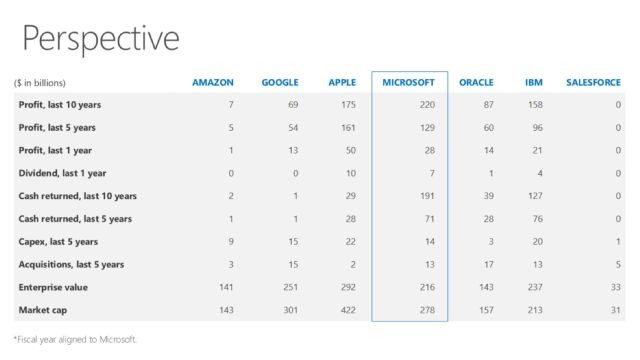 The slide, which was simply labeled as "Perspective", showed Oracle, IBM and Salesforce as examples of enterprise businesses, while Amazon, Google and Apple were listed as being more consumer oriented. Microsoft has its feet in both enterprise and consumer ventures. The chart shows that Microsoft competes very well and even beats many, if not all, of the six listed companies in those categories.

When referencing the chart, Ballmer stated:

But you take a look and you say, okay, how have we done? We've done pretty well in profit, very well in profit, in fact. Even if you look at just the last year with the exception of Apple, we're the most profitable company on the list. If you look at dividends until Apple started a dividend we are the biggest pay out. And now they've passed us. We just made our most recent increase. If you look at cash returned to shareholders, the last 10 years we kind of blow everybody away. And if you look at the last several years, IBM particularly through buyback has chosen to return cash.

Ballmer's presentation on Thursday showed that he was aware that the company's Windows business was facing new challenges and that the company currently has, in Ballmer's own words, "almost no share" in the mobile device market. However, he seemed optimistic that Microsoft could grow its presence in the mobile product industry.

Microsoft did not offer any information on the search for someone to replace Ballmer as CEO during the financial analyst meeting. However, Ballmer himself brought the subject up in his presentation. He said:

We made this decision to announce before we had a replacement so we could run the absolute best succession process on the planet. I've got to say it's kind of a little weird for me to come to work and have that kind of known, and yet when we talked it all through, we said this is absolutely the best way to ensure that the company gets the leader that it deserves for this incredibly talented team. Whether it's one of our people who works here or somebody from outside, we wanted to make sure to be able to do that incredibly thoughtfully.

Whomever is picked to be the new CEO of Microsoft will certainly be compared instantly to Ballmer. The big question is whether or not the new leader will be able to continue Ballmer's pretty impressive financial legacy, no matter what other pundits think of his leadership of Microsoft.