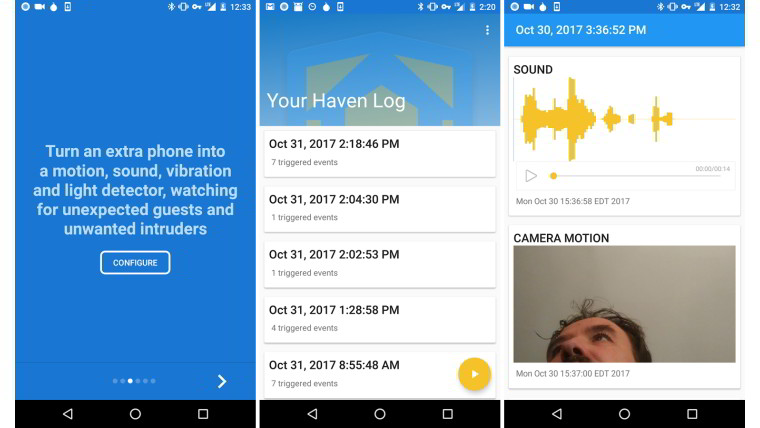 If you have ever had the feeling you are being watched or followed, or could swear that someone was in your home or used your devices while you were away, NSA leaker Edward Snowden has helped launch an Android-only app in beta that turns your electronics into instant monitoring tools.

Haven, a joint open-source project between The Guardian Project and Snowden's Freedom of the Press Foundation, has launched on the Google Play Store and turns the hardware of your smartphone or computer into a security center. The app page explains in detail what it does:

Haven only saves images and sound when triggered by motion or volume, and stores everything locally on the device. You can position the device’s camera to capture visible motion, or set your phone somewhere discreet to just listen for noises. Get secure notifications of intrusion events instantly and access the logs remotely or anytime later.

The follow sensors are monitored for a measurable change, and then recorded to an event log on the device:

* Accelerometer: phone’s motion and vibration
* Camera: motion in the phone’s visible surroundings from front or back camera
* Microphone: noises in the enviroment [sic]
* Light: change in light from ambient light sensor
* Power: detect device being unplugged or power loss

"Imagine if you had a guard dog you could take with you to any hotel room and leave it in your room when you’re not there. And it’s actually smart, and it witnesses everything that happens and creates a record of it," Snowden told Wired in an encrypted phone call from his home-in-exile Moscow. "The real idea is to establish that the physical spaces around you can be trusted."

The app became the brainchild of Micah Lee, a foundation board member, and Snowden earlier this year. The two used foundation developers in partnership with nonprofit security group Guardian Project to build the app, with the goal of protecting your electronics and belongings while you are out and about.

"We thought, is there a way we can use a smartphone as a security device," The Guardian Project director Nathan Freitas told Wired. "Take all the surveillance technologies in smartphones and flip them on their head, to keep watch on all the things you care about when you’re not there?"

While the idea of turning your devices into security monitors is not new, Haven definitely seems to be much more full-featured. While the app is more designed for the type of people that use burner phones, it can be put on your personal phone if you tend to leave it around the house - or hotel room - when you are out.

"We designed Haven for investigative journalists, human rights defenders, and people at risk of forced disappearance to create a new kind of herd immunity," the app page says. "By combining the array of sensors found in any smartphone, with the world’s most secure communications technologies, like Signal and Tor, Haven prevents the worst kind of people from silencing citizens without getting caught in the act."

If you don't fall into any of those clandestine categories, you can still have a little fun with it on a spouse you don't trust, or to keep an eye on your mischievous kids or co-workers.