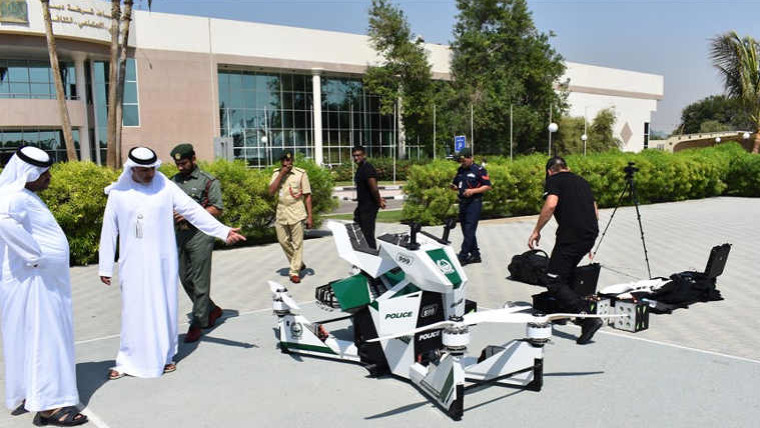 The police in Dubai have been using Bugatti Veyrons for quite some time and have showed their interest in using robot police cars too, but it seems that they don't think they have all the capabilities they need yet, as they will now be equipping some officers with hoverbikes.

The machine that they are going to be using is called the Scorpion-3, built by Hoversurf, a Russian company. The hoverbike is battery-powered, has four propellers, is designed to carry one person with a lift capacity up to 300 kgs, and can get up to speeds of 45mph (72 kmph) with a total flight time of 25 minutes. Its batteries can be switched and fully charged in approximately 3 hours and the bike can also fly in a drone-like remote mode, where it can reach to speeds of up to 60 mph (96 kmph).

The whole concept is very similar to the flying vehicle developed by Kitty Hawk, apart from the significant exception that this vehicle is actually designed to be flown over land as opposed to the water-bound Kitty Hawk.

This hoverbike will give Dubai Police officers the ability to go straight over any traffic and many other obstacles to get to required incidents, as the Scorpion-3 sits at a programmed altitude of around 20 feet above the ground. The makers wanted to create something which takes the excitement of offroad dirt biking and combines it with drone flight tech, and they report that the vehicle is increasingly being seen as an extreme sports vehicle. In terms of safety, the company has a few words as well:

SCORPION platform is equipped with a safety system powered by state of the art flight controllers, special logical programing and passive elements with computer aided speed and altitude limiting.

Interestingly, once the Scorpion-3 is in full use by the Dubai police, along with the Volocopter drone taxi service, which is also in Dubai, all the components for the world's first flying drone-based police chase will be possible.