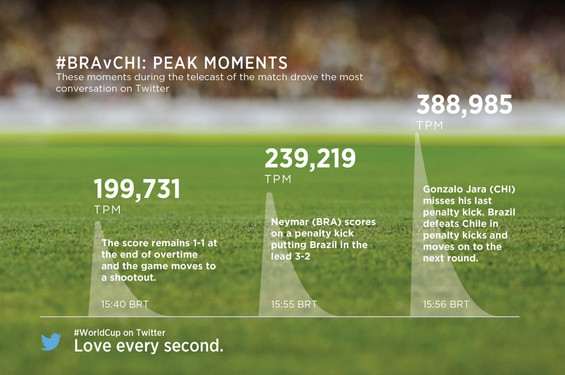 A recent World Cup match that saw host country Brazil play against Chile generated a record breaking 388,985 tweets a minute (TPM) during the final moments of the game. The match concluded with Brazil going through to the quarter-finals after a penalty shoot-out, where Chile's ﻿Gonzalo Jara missed the final goal.

Twitter also revealed how the renowned Brazilian striker, Neymar, was the most mentioned player in the swarm of tweets. This is understandable when he scored the team's final penalty, pushing Brazil through to the next round. It may be worth noting that his goal caused a spike of 239,219 tweets per minute, and it wasn't until Jara's failed attempt at scoring, that the statistic shot up to its 388,975 glory.

Overall, the game caused a stir of over 16.3 million tweets during the match, the highest ever for a live event on Twitter. In addition, the social network has said that over 300 million tweets had been sent since the tournaments group stages began. This has resulted in the World Cup to be "one of the most talked about events on Twitter of all time."

Previously the record had been set at 382,000 tweets per minute during the hugely popular Super Bowl. As to what the final of the World Cup will bring, only time will tell.