So we here at Neowin enjoy watching films, whether it’s heading to the cinema or catching something on DVD or BluRay. However there are those times that we think “now that film was terrible, why did I choose it?” or “surely there was something better to go see than that.” Now you could look up what the critics are saying and go by their ratings, but why not have ratings predicted for you?

This is where Criticker comes in, it’s a semi-social movie rating site that, based on the films you rate, will predict the films that you will like and the films you will end up hating before you even start watching them. If you have friends using the service, they will also rate how closely your movie taste is – but bizarrely only a handful of people know of the site despite what they offer.

Criticker is all about ratings; without wanting to post them and without having them the site is pretty much pointless. The beauty about Criticker’s rating system is there is no standard rating system – you can create one for yourself. Whether you want to use any number between 0 and 100, just use multiples of 5 or 10, or even go from just 1-10 – it’s all possible and will work smoothly for you. 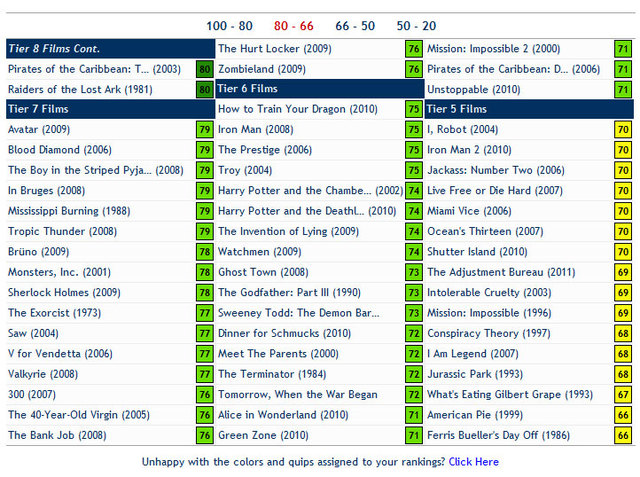 This is due to Criticker’s tier system. There are 10 tiers that evenly divide your film ratings ranging from your Tier 10 ratings (top 10%) right through to Tier 1 (bottom 10%). It doesn’t matter what number you put in, as for example if you never rate anything below 50, films rated near 50 will encompass your bottom tiers; Tier 5 for you might contain films ranked 70-75 whereas it could be 50-60 for someone else.

Along with the tiers you have simple rating titles and colors: Tier 10 is “Awesome!” and dark green, Tier 5 is “Alright” and yellow, Tier 2 is “Bad” and red, and so on – but you’re not restricted to these, in fact you can easily change them via a simple tool. You can also post written reviews for films you’ve seen, and other users can star these if they think they’re worth reading.

Film pages themselves are heavily based on the ratings. Criticker encourages the use IMDB for more in-depth movie information, and instead you have a large portion of the page taken up by your rating or PSI (depending on whether you’ve rated the film) and ratings from other users. 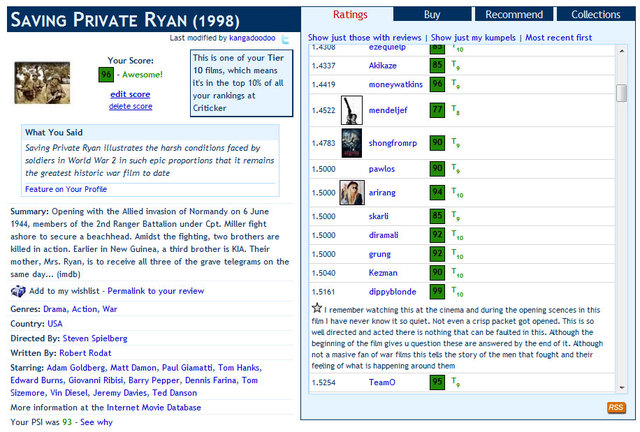 Thanks to the tier and color system you can easily see what other users have thought. User ratings are ranked top-to-bottom via their TCI (see below), and via a quick glance you can see what they thought. Seeing all dark green and T9/T10 means those users thought the film was great; yellow and T5 not so much. It’s also here you get to see the great variety in user rating scales – we’ve seen ratings of 94 in Tier 8 (top 30%) but also that of 75.

We understand that the rating system used can be very confusing at first, but after you grasp the simplicity of using tiers and colors rather than raw scores to see whether a user has enjoyed a film, it becomes a great and much more informative system to use.

The Probable Score Indicator (known as PSI around the site) is the key and outstanding feature of Criticker. Essentially it is a prediction algorithm that can work out your probable movie score very easily: 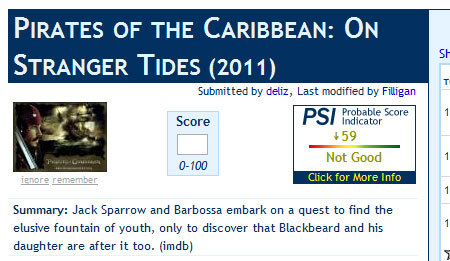 Obviously a big part is how accurate the PSI is, and it’s surprisingly (and freakishly) accurate. Out of the most recently ranked films on my account (Scorpus), Criticker was crazily close to getting them right.

This list goes on for all my 193 ratings and all are usually within 5 points of being right. A lot are dead on accurate to what I thought. Some have been off by around 10 (Black Swan rated 88. PSI said 97) or more (Australia rated 49. PSI said 64) but these are few and far between. Once you have enough ratings, you can trust that when Criticker says you will think the film is just “Good” (Tier 7, Top 40%), that is more than likely what you will come out of the film thinking.

Thanks to these PSIs the main page of Criticker, when logged in, can display recommendations. A lot of the recommendations are either old (before the 1960s) or obscure, but some of them are worthwhile and good to check out. The top recommendation slot is always “In Theaters” so you can see what you might like from what’s showing right now. 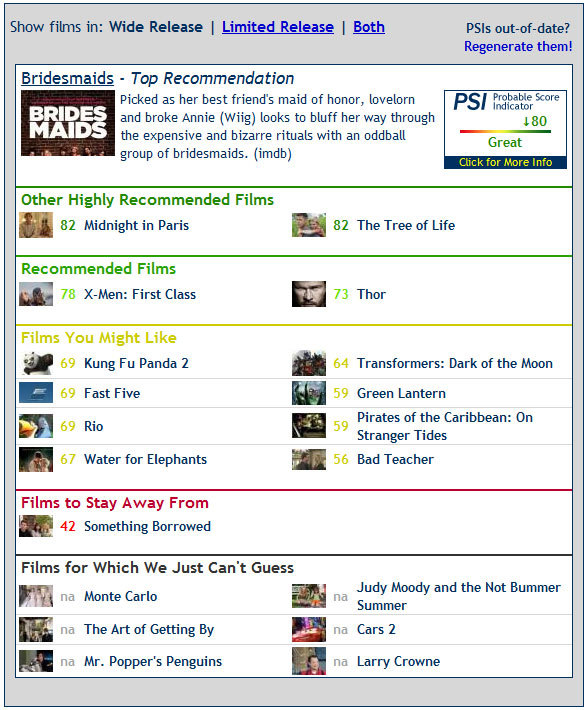 There is also a hand PSI area where you can see 50 newly-generated probable scores of films. These are generated at random, and for free you can generate 50 more if the suggestions aren’t to your liking. Even better, you can head to the New Releases area and check our your PSIs for films that have been recently released in the cinema, and it even tells you which films to steer clear of.

For a small US$1.50 fee you can generate PSIs for every single (60,000+) film on the site rather than as you view movie pages to give better recommendations, or have them regenerated every day with their US$5 p/m no-ads package. If you go with the sponsor package you also get several other cool features such as comprehensive statistics of your most loved genres and “Films (we'd bet are) Missing from Your List.”

As mentioned previously, these TCIs help out in the generation of your PSIs, and also are used to display user ratings that are as close as possible to you on the movie information pages spread throughout Criticker.

There is also a handy feature called Kumpels (as Criticker points out, is German for “buddy”), which allows you to follow any user and see their recent ratings and activity in the Kumpel area. These could be people you know, or simply people with a TCI that is quite close to one, meaning their ratings and reviews would be close to yours. You can also get joint recommendations for something such as a movie night – Criticker will generate a film that scores highly on the PSI for both you and a mate that both users haven’t seen; handy for when choosing a film is hard.

We are honestly surprised at the lack of talk about Criticker – the service they provide is simply too awesome to pass. If you’ve been rating films elsewhere, you’re certainly missing out on the fantastic movie prediction that the site offers. When it comes to wanting to see a film in the cinema, simply check Criticker to see whether you will like it. Wanting to see a film tonight? Hit up the recommendations and choose a highly ranking PSI one.

Simply put, there is no better movie ranking site on the internet. PSIs make Criticker, TCIs help it out, and if you love seeing good films you definitely should be using their service, so go ahead and check them out.

Note: We've had mixed website performance with Criticker. At times the site is very fast, and at times is slow to load (especially the main page). As such, we neither listed the site's performance as a pro or con