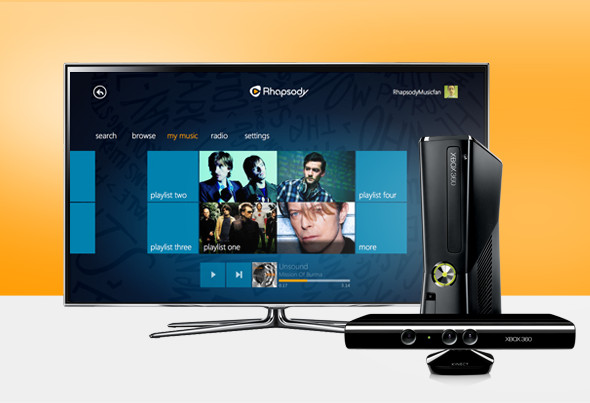 Microsoft keeps adding to the number of media apps available for Xbox 360 owners to try out. Today, it was revealed that the Rhapsody app is now accessible for owners of the game console.

Rhapsody's press release says that current subscribers to the music streaming service will be able to use the new Xbox 360 app, as well as subscribers of the paid Xbox Live Gold service. The app also works with the voice recognition and motion gesture support that are part of the optional Kinect hardware add-on.

The service currently has over 16 million songs in its online catalog. Rhapsody adds:

Like Rhapsody’s apps for Smart TVs, the Xbox 360 app will make it easy to quickly find and play your favorite music, with radio, new releases, popular albums and member playlists featured prominently. Listeners have access to the entire Rhapsody catalog, as well as featured editorial stations that are hand-crafted by Rhapsody’s expert staff.

Microsoft started adding third party media app support to the Xbox 360 with the Netflix app a few years ago and since then the company has been adding more and more apps from Hulu, ESPN, Amazon Video, HBO Go and many more. There are rumors that Microsoft is working on a stand alone media streaming hardware box for launch in 2013.