After a year of PR disasters, weak product launches, a collapse in market share and a dramatic decline in its share price, RIM desperately needs some good news to kick-start its recovery. It’s no secret that the company’s future is engrained in its ability to transition its product line to its new BBX operating system, and RIM has now shared a few details about its first BBX-powered smartphones.

Alec Saunders, RIM’s VP for Developer Relations, confirmed to PCMag that there would be one standard screen resolution (1024x600px), with a 16:9 widescreen ratio, for the first BBX phones. That’s an unusual resolution for phone handsets, but it’s no coincidence that it matches that of RIM’s BlackBerry PlayBook tablet, launched earlier this year.

Saunders explained: “If you build [an app] for the PlayBook, then it will run on BBX”, implying a smoother and simpler software development process across RIM devices. Creating powerful apps that can take advantage of advances in the new OS will be essential to ensure its long term success and streamlining the development process will only improve RIM’s chances here.

More importantly, though, this also means that apps that already run on the PlayBook today will run on the first BBX devices with no compatibility issues, so those handsets will have access to an existing library of apps from day one.

However, RIM will face challenges in attracting developers to the platform. Google this week confirmed that it will abandon development of its Gmail app for BlackBerry; the fact that such a prominent player is withdrawing from its platform betrays an underlying absence of confidence in BlackBerry’s long-term prospects, and that will only make it harder to encourage existing and new developers to create software for BBX.

Saunders also confirmed that BBX would include the key features already promised for the PlayBook 2.0 OS, including native email support and BES push services. One would hope that BBX will also include BlackBerry Messenger, even though RIM confirmed that, in addition to delaying PlayBook 2.0 by several months, it has had to abandon plans to bring BBM to the PlayBook in that update. 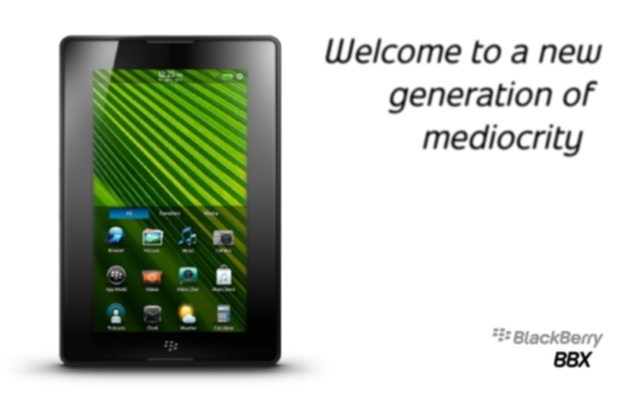 In fact, that delay is symptomatic of the problem that RIM faces: this may all be too little too late. RIM promised to deliver features like native email and BBM to the PlayBook this summer, but these won’t actually arrive until February 2012. Meanwhile, the first BBX device isn’t expected to launch until the second quarter of 2012 at the earliest, and by that time, Apple, Google and Microsoft will be preparing to launch their next generation of mobile devices, leaving RIM – once again – at least a generation behind everyone else.

Last week, RIM’s share price fell below book value, effectively confirming that its investors and the market as a whole no longer have any confidence in its prospects for the future. Since then, its share price has only continued falling.

RIM can talk all it likes about what it’s got planned for BBX, but its shareholders, customers and developers are evidently bored of its words and broken promises. Sadly, time is running out for RIM. The end may well arrive before it can launch the products that it believes, perhaps misguidedly, to be the key to its salvation.