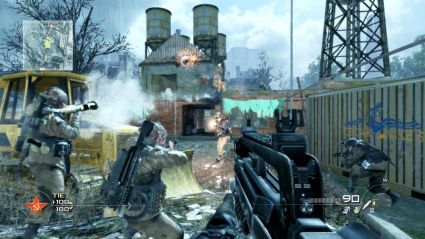 The biggest game release of 2011 might be a game that hasn't been officially announced yet. However that situation could be changing be very soon. It looks like the Official Playstation Magazine in the UK will be one of the first media outlets to get the first details of Call of Duty Modern Warfare 3, the next game in Activision's mega popular shooter franchise.

The Pushsquare.com web site has posted up an image of a page from the current print issue of OPM UK which shows a big green number "3" and the statement "The biggest game in the world returns" at the bottom. The magazine is set to be released on newsstands on June 8 which likely means it will reach subscribers much earlier than that. Either way, it looks like Modern Warfare 3 is getting close to its reveal, just a few weeks before E3 2011 begins.

It will be interesting to see what the game will be like as it will be the first in the series made without a lot of the team who made the first two Modern Warfare. The two founders of the game's main developer Infinity Ward were fired by Activision in 2010 and in the wake of that event a large number of Infinity Ward team members left to form Respawn Entertainment.

In related news, rumors that Activision is about to officially announce Call of Duty Online seem to be a bit off. The Rock Paper Shotgun site had reported that such an announcement might be coming soon but now it appears the reveal concerns a stats tool for the franchise rather than a game.

Finally if you enjoy playing the last game in the series, Call of Duty Black Ops, then you might want to join an online server for a few hours this weekend. From now until May 10 players in multiplayer matches will get double the normal amount of XP while playing online.