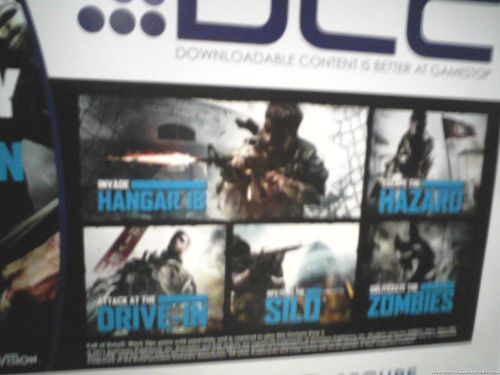 Even as Activision starts its marketing machine to promote the release of Call of Duty Modern Warfare 3 there is now evidence that the publisher isn't quite done yet with the last game in the first person shooter series. In a post on the DigitalWarfare247.com web site it has a blurry image of what appears to be an ad showing that a third downloadable map pack for 2010's Call of Duty Black Ops is in the works.

The ad shows lists what appear to be four more multiplayer maps for the game which could have the names Hanger 18, Hazard, Drive-In and Silo if the image is indeed correct and not a clever fake. There's also a listing for a new zombies map for the game. So far Activision has yet to confirm that a third DLC map pack is indeed in the works.

So far Activision has released the First Strike and Escalation map pack for Call of Duty Black Ops. In a recent financial press release Activision said that the First Strike map pack was downloaded 1.4 million times for the Xbox 360 version of the game in its first 24 hours at $15 per download. It would certainly make a lot of business sense for the publisher and the game's developer Treyarch to release a third DLC map pack for the game. Meanwhile the next game in the series, Call of Duty Modern Warfare 3, is in the works and expected to be released to stores on November 8.