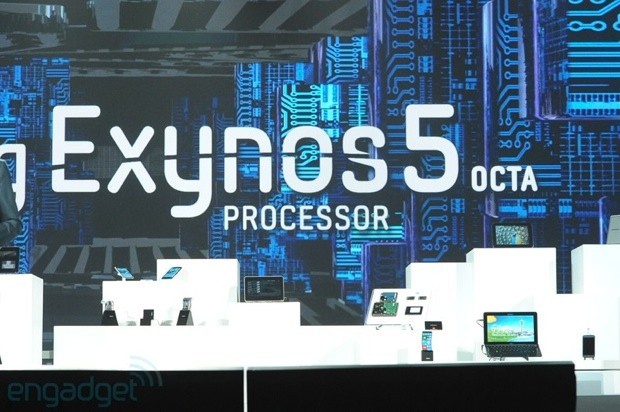 At CES 2013 we've seen both Qualcomm and NVIDIA announce impressive new mobile chipsets and now to round out the major three manufacturers we have Samsung showing off a new Exynos processor. While it's not an entirely new generation of silicon, the new Exynos 5 Octa chip is set to bring interesting performance and battery life gains over the Exynos 5 dual CPUs that are already in the market.

While this chip is technically an eight-core processor, it's actually four ARM Cortex-A15 CPUs paired with four ARM Cortex-A7 CPUs; the former for high-powered tasks and the latter for saving battery. The chipset uses ARM's reference big.LITTLE processor switching technology, will switch between the A15s and the A7s depending on the performance needs of the tasks, allowing for greater performance over Exynos 5 Dual chips, but also longer battery life.

The Exynos 5 Octa should also be more efficient thanks to a slight die shrinkage from 32nm HK-MG (in the Exynos 4 and Exynos 5 Dual) to 28nm HK-MG. Clock speeds of the cores aren't known at this stage but the GPU inside should stay as the Mali-T6xx series (although the exact model wasn't confirmed). Samsung also neglected when we'll see this chipset in any new devices but well place bets that it'll turn up inside the next Galaxy flagship.