It’s no secret that Microsoft stunned the technical world with the unveiling of the Surface. In turn, the reveal managed to make some of the OEMs shift uncomfortably in their seats and continue to trash talk the devices now. Add the rumor of a Surface Phone (or Microsoft branded handset) and it’s an interesting and exciting time for Microsoft and the consumer. 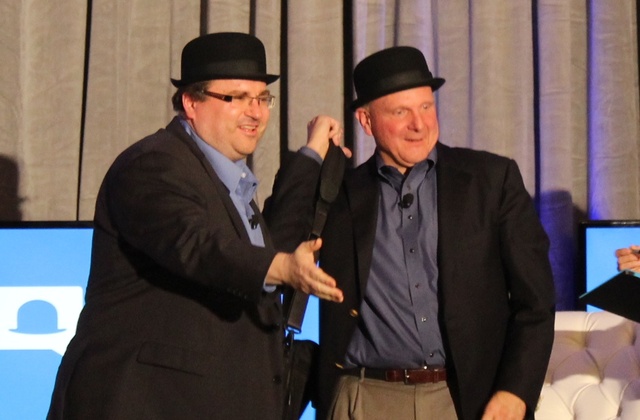 Speaking at a Churchill Club event with Reid Hoffman, co-founder of Linkedin, Steve Ballmer was asked about Microsoft’s push into the hardware market.

There has been a shift. OEMs will still build the lion’s share of Windows devices. With that said, it is clear that there is an innovation opportunity on the seam between hardware and software – and it must not go unexploited by Microsoft. We continue to work with HP and Dell, Toshiba and Sony and Acer and Asus and HTC and Nokia and Lenovo. But where there is innovation that crosses hardware/software boundary, they are not going to cede. Software is still the skill to have; but going to the market will be through devices and online services.

Hoffman noted that this will probably create tension within the ecosystem as a whole, with Ballmer stating they will navigate carefully and be completely up front with people (assuming he mean stakeholders, partners and consumers). Although you have to wonder just how much the OEMs knew about the Surface hardware before the public unveiling. Surely Microsoft wouldn’t have risked annoying them in the build-up to the launch of Windows 8, arguably the most important OS from the Redmond giant since Windows 95; would they?

Ballmer then touched upon the Xbox and the fact Microsoft just build the device, and that phone hardware specs are being closely controlled. But when he touched upon PCs, Hoffman out and out asked would Microsoft ship a PC.

Surface is a PC for all intents and purposes. The OEMs are doing great work and we’re excited about it. Same is true in phones. No need to repeat what other companies are doing brilliantly.

So that is that; at least for now. Don’t expect Microsoft to allow the OEMs to have all the control in the hardware market, with the Surface being the best example of the company being willing to take a chance and introduce their own device(s) into a very established market.