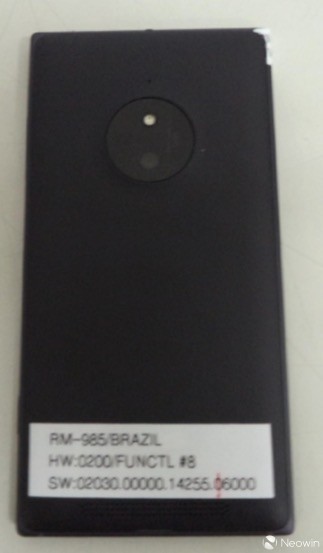 Pictures often say more than words ever can and in the case of the Lumia 830, we have quite a few images to give you a fresh look at the device. The handset you see in the image above is of the Lumia 830 - despite others saying that this could be the Lumia 730, the documentation we have clearly states Lumia 830.

Unfortunately, the documentation does not have all of the specs of the device but you can clearly see a PureView-style camera setup on the back of the device and the writing on the lens housing does appear to say PureView.

We can take note of the specs visible in the images, such as microSD support, dedicated camera button and LED flash, and we have been told that the device supports NFC and wireless charging (although this may be supported as an add-on, rather than integrated), Additionally, the 830 will feature 4G LTE support and use a nanoSIM.

​Based on where we obtained these images, it seems the device is quickly approaching release and should be announced in the near future; the phone will be part of a global release. As with all new Windows Phones, expect the Lumia 830 to ship with Windows Phone 8.1 GDR 1 which includes support for folders.