Apple and Microsoft have had a long, colorful relationship over the years, from outright hostility to strategic partnerships. Regardless of whether you take sides, or love 'em both equally, one thing's for sure: without both of them, the technology industry would sure as heck be a lot different. Let's take a look at some of the tech titan's interactions over the years.

Applesoft BASIC: Microsoft's BASIC products were some of its earliest successes, but no doubt a lot of Apple users would be shocked to learn that Microsoft collaborated with Apple on a version of their version of the BASIC language. The collaboration went right down to the name - 'Applesoft' was a combination of Apple and Microsoft. Microsoft's version of BASIC was the defacto standard back in the day, so it was only natural for Apple to turn to them to bring it to the Apple II when Steve Wozniak was too busy working on other projects. 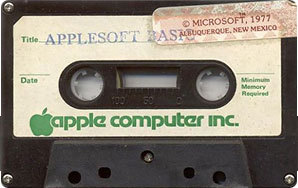 Yeah, that's a cassette. Got a problem with it?

Word for Mac: These days we take it for granted that Microsoft Word is the premiere graphical 'what you see is what you get' (WYSIWYG) word processor - anything less would just seem plain silly nowadays. But it wasn’t always that way. Before the first version for the Mac, Word relied on a text based interface, even for basic formatting functions. Throw in true WYSIWYG abilities, and it’s not hard to tell what a huge difference the graphical interface made. If you don’t believe us, just compare the screenshots.

Microsoft Office: If you haven’t been around since the dawn of the GUI era, chances are that you’re wondering why we’re splitting Microsoft Word and Microsoft Office into two different factoids – trust us, we’ve got a good reason. Even though the two are virtually synonymous today (does anyone actually buy Word without the rest of Office?), it wasn’t always so – Word actually predates Office by nearly 10 years. Office actually started out as a limited time bundle of Word, Excel, PowerPoint and ‘Mail,’ released in 1989. Office turned out to be a huge hit, and a year later saw the release of a Windows version. Although there was a 4 year gap between version Office 4.2 and Office 98 Macintosh Edition, it's always remained a very popular app, even among Mac users. 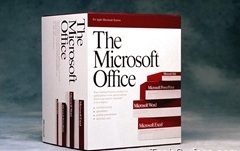 That's The Microsoft Office to you!

Apple Computer, Inc. v. Microsoft Corporation: Tech companies have always been a litigious bunch. When Microsoft introduced Windows 2.0 (there had been a tenuous peace between the two when the first version was released), things really got nasty between them and Apple - so nasty, in fact, that it almost went all the way to the U.S. Supreme Court. In a nutshell, Apple felt that the Windows GUI was a little bit too similar to their Macintosh GUI.

And while there were definitely similarities, the fact was (and not even Steve Jobs denied this) that Apple's GUI had taken cues from Xerox to begin with, although they had definitely come a long way from Xerox's primitive prototype. Because of that, Xerox even joined in on the fun, suing Apple for stealing their GUI. In the end, Xerox's case was dismissed, while the court decided that the GUI fell under the jurisdiction of ideas, which is not covered by copyright law. The situation wouldn't be fully resolved until... 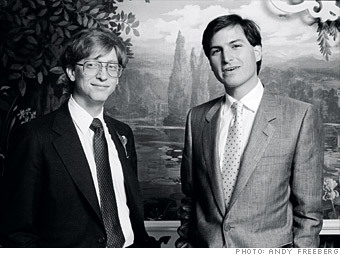 "Well, Steve, I think there's more than one way of looking at it. I think it's more like we both had this rich neighbor named Xerox and I broke into his house to steal the TV set and found out that you had already stolen it."

Microsoft (sort of) saved Apple: Chances are that you've heard this story before, but no article about the relationship between Apple and Microsoft would be complete without repeating it. Back when Steve Jobs returned to Apple in 1996, Apple was in pretty dire straits, while Microsoft had risen to total dominance of the industry. Strange as it seems, Microsoft decided that it was high time to invest in Apple. Maybe it was a strategic move to help protect Microsoft from anti-trust scrutiny. Maybe it was a business move, to create - or at least maintain - another market for Microsoft's products. Or maybe it was just plain sentiment on Bill Gates' part.

Either way, it doesn't make much difference; Microsoft's cash infusion, and the assurance that it would keep Office for Mac up to date in the future, helped to revive Apple. Microsoft gained a whole new market for Internet Explorer in Mac users, Apple gained a boatload of cash, and Mac users got an awesome new version of Office. 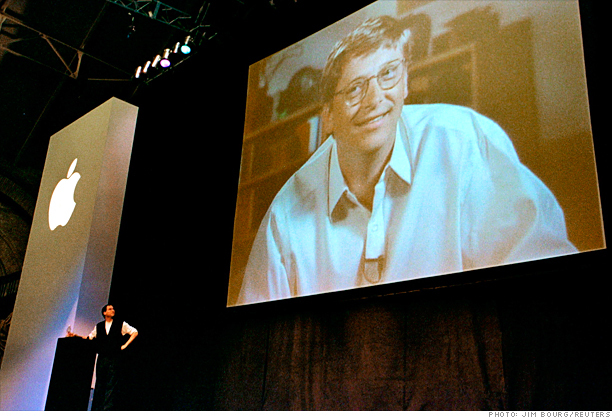 Is that Big Brother?

iTunes & the iPod: So far, we've talked a lot about Microsoft software on the Mac, but not a lot about Apple software on Windows. That's understandable, since Apple usually keeps their cards pretty close to their chest. But there is one very big Apple product that couldn't have gotten where it is today without Windows: iTunes and its physical brother, the iPod. The iPod was a great product on the Mac, but without Windows compatibility, it couldn't have reached the masses that made it the huge success it was.

And so Apple broke the mold by offering iTunes for Windows, and the rest is history. Apple would follow up on this by offering several other Windows compatible products, like Safari. Meanwhile, Microsoft is still making products for the Mac, and even bringing them to iOS. 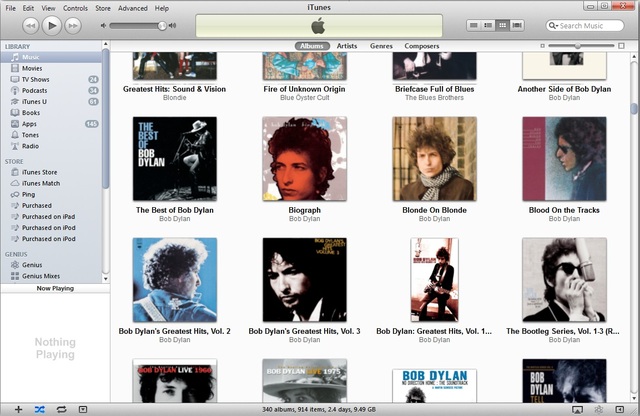 Before iTunes, QuickTime was the only widely available Apple software for Windows

Images via CNN, Wikipedia, US Stock Market and Ethan Hein