Cairo was set to be the most advanced thing Microsoft had ever done. The only problem was that it never really existed. A favorite buzzword throughout the ’90s, Cairo went from being the successor to early versions of Windows NT, to being a 'technology,' to being vaporware. And even though some people thought it was just an elaborate rouse to make Microsoft appear ahead of the competition, internal documents prove that Redmond was pretty serious about Cairo. And despite never making it to market,  Cairo somehow still managed to leave its mark on Microsoft's product line for the next two decades, right up until today.

Information at your fingertips: This was the core of Cairo. Even though Bill Gates coined the phrase back in 1990, before Cairo came into play, it would end up being central to the project. Cairo was all about presenting information in a useful way, making it easy to search through information using a powerful new file system called OFS (which would later reemerge as WinFS, slated to be included with Longhorn/Vista, before being totally abandoned in 2006).

Now that's a slogan to swear by

Without getting too technical, this was going to make it easier than ever to find what you were looking for. As an internal Microsoft document puts it, 'Cairo provides content-indexing for all popular applications (which produce any kind of document). This means finding information can be virtually instantaneous. For example, finding all documents containing "Novell Netware 4.0M is now a simple query, rather than a painful search through the directory hierarchy looking for clues in file names.'

Smart Folders: The concept of 'information at your fingertips' appears on other levels of the Cairo OS, too. Smart Folders, or Delphi Collections, were going to be like your typical Windows folder on steroids. They were supposed to be able to intelligently rearrange whatever they were storing and display it in different ways depending on what they were being used for. Cairo was supposed to ship with three built-in Smart Folders to demonstrate its capabilities. This dream has been realized by libraries to an extent, but it's really not possible with NTFS, the filesystem used in current versions of Windows. 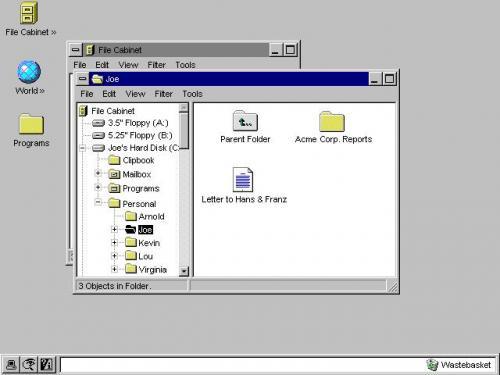 Cairo was to include three built-in Smart Folders: an email client, a bulletin board system, and a document manager

The UI: Microsoft isn't exactly famous for coming up with catchy names for its product features, but they described Cairo's UI as an 'intuitive, object oriented user interface.' Cairo may have never made it out, but a lot of its UI design made it into Windows 95, and pretty much every version of Windows since then. 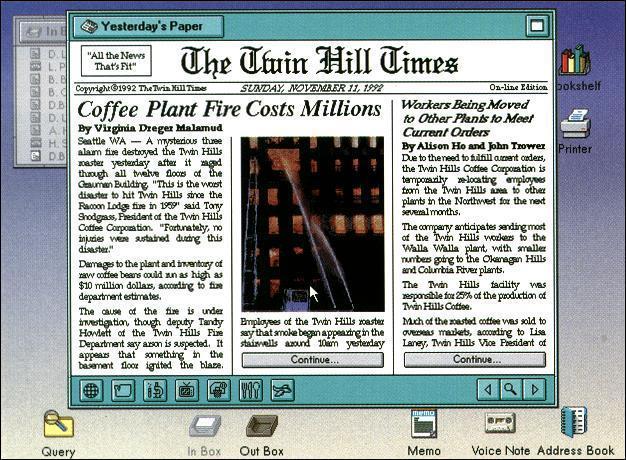 See what they did there?

System Requirements: For such an advanced operating system, Microsoft was shooting for some pretty low (in hindsight, at least) minimum system requirements: a 25mhz processor, 12 MB RAM, and at least 100 MB of harddrive space.

Some things Cairo couldn't do

Networking: Now here's something ironic. For all its talk of making information more accessible and bringing networking to the forefront with Cairo, Microsoft basically ignored the internet throughout most of its development. And while Bill Gates' famous 'tidal wave' memo admitted that Microsoft was letting its competitors get ahead of it on the internet, he did mention in passing that a lot of Cairo's innovations could be used to give Microsoft a significant online advantage. 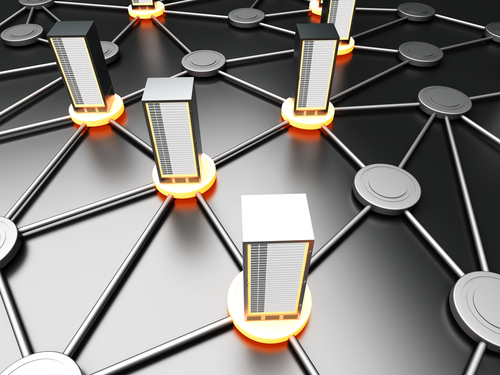 Cairo made a huge deal out of connecting to networked file systems; using 'heterogenous storage' was going to be as simple as using your own files. Corporate networks were supposed to disappear into the system, giving employees seamless access to anything they might ever need. Again, information at your fingertips. Or distributed computing on steroids, if you like.

Retail: Long before Cairo was anywhere near shipping (from the early 1990s until about 1998, it was perpetually slated for 'next year'), Microsoft was planning to ship three different versions to retail. Cairo Advanced Desktop was aimed at end users and developers, and was basically the full OS minus some enterprise level networking capabilities. If you needed those, you'd have to use Cairo Advanced Server. Cairo Design Environment, meanwhile, provided the tools to design Smart Folders and any other tools a developer might need.

Cairo still had nothing on Vista's retail strategy

You've got to give Microsoft credit for seeing the future, even if they didn't always execute it quite as well as they should've. Even as early as 1990, Bill Gates was talking about technology that sounds a lot like where we’re at today. Sure, there have been some radical developments that really shook things up, but when it comes to mobility, power, and ease of use, Microsoft was spot on. Projects like Cairo might’ve been a little bit too far ahead for their time, but history has vindicated them.

If you’re interested in learning more about Cairo, we recommend you check out this internal Microsoft document (be warned – it’s a bit technical at times), released as part of the legal procedings of Comes vs Microsoft, as well as checking out Bill Gates’ ‘information at your fingertips’ speech (the revisited, 1995 version is widely available on YouTube, if you're interested in that).

Images via Chipsypc and BetaNew
Connected Cloud Image by Shutterstock