You would never guess it, but in the 1980s, Microsoft was king of the Unix world. That's right; while juggling MS-DOS, Windows, and a plethora of other products, Microsoft somehow found time to develop the most popular version of Unix.

Licensed from AT&T and based on Seventh Edition Unix, Microsoft started development of their very first operating system in 1979, just months after moving into new digs in Bellevue, Washington. Back then, AT&T wasn't licensing the Unix brand itself, only the source code, so Microsoft had to give their new OS its own branding. Xenix, as the project came to be known, was Microsoft's true operating system. 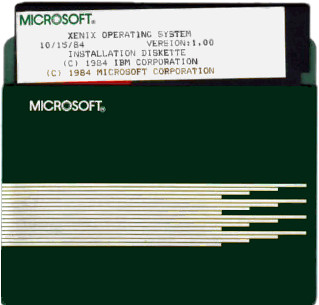 In the days before MS-DOS (which was really just a last minute solution, but we’ll get to that in a minute), Xenix was Microsoft’s play for the OS market. Even though it came first, Xenix was probably a more powerful OS than MS-DOS, although both had their own advantages. Still, it was still a pretty amazing feat that Microsoft managed to get a real Unix experience running on a microcomputer, since it’d originally been designed for larger, multiuser systems. They even bolstered Unix 7’s feature set by including a few features from BSD.

In 1981 IBM was looking for an OS to power the Personal Computer. As it turned out, IBM had no desire to cozy up with the recently split AT&T, so Xenix was out the window. Microsoft hurriedly ran out and bought 86-DOS, the ‘Quick-and-Dirty Operating System,’ from Seattle Computer Products, and managed to convince IBM to use it in their new product. It was an off the cuff move that would have stunning repercussions for the industry.

The IBM PC could've been the ultimate Unix workstation for the consumer and enterprise market. With Microsoft's roadmap still pointing towards a Xenix-dominated future, the IBM PC could've been their Trojan horse, a well put together device that would set the stage for everything to come. Unfortunately for Unix fans, it turned out being the bullet that set Xenix on the path to a long, slow death.

Chances are you know the basics of what went down; the IBM PC launched a revolution, and ended up setting the standard for what was to come. Part of that standard was its MS-DOS operating system. This pretty much locked Xenix out of a huge chunk of the market. Still, Microsoft kept it alive well into the graphical interface era, releasing a port for the Apple Lisa, and launching Version 2.0 in 1985.

By ’87, the writing was on the wall, and Microsoft decided it was time to dump the aging OS. They entered into an agreement with SCO, a Xenix partner since the early days, and traded them the full rights to the OS in exchange for a 25% stake in SCO. They carried the Xenix torch into the 21st century in the form of SCO Unix, before filing for bankruptcy in 2007. UnXis, Inc. bought the rights to the assets and intellectual property in 2011, recreating SCO as TSG Group. Unfortunately, back in August they filed for bankruptcy again, stating that “There is no reasonable chance of rehabilitation,” so it looks like Xenix’s journey may finally be reaching its end, although we imagine very little of Xenix actually lives on in recent products.

Long after the sun had set on Microsoft's Xenix, the venerable OS was still the backbone of their internal operations well into 1990s. As one former employee put it:

"I think the original DOS might have been developed on one of their old VAX mini's but by the time I got there everything including DOS 2.x, all their languages and applications, Mac Word and Mac Excel, Windows Excel and Windows Word were written in vi and compiled on those goddamn Xenix boxes, and all their documentation was written in vi and compiled in troff and nroff. I don't think [they] really moved to the PC platform for development until around the time Windows 3.1 came out."

If that says one thing, it's that Microsoft was pretty darn flexible in those days. Not only were they actively developing for three different platforms (Mac, MS-DOS, and Windows), but they were still hanging on to Xenix, and even using it as the primary driver of their operation! Makes you wonder if Bill Gates has a soft spot for Unix. 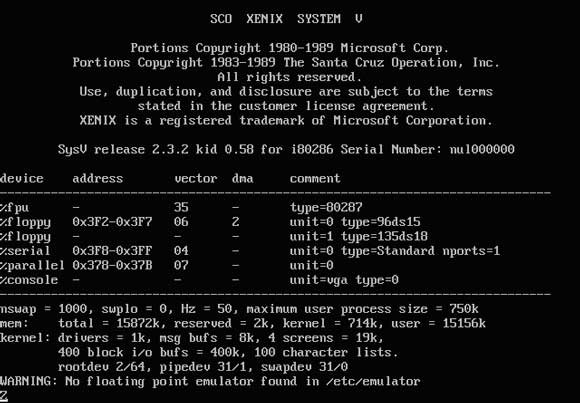 Even though it’s pretty obscure nowadays, don’t underestimate the influence of Xenix. It helped Microsoft cut their teeth on OS development, and somewhere deep inside Windows to this day, maybe there’s a little part of it still alive, as Bill Gates’ remarks at the 1996 Unix Expo hint:

"Well, Microsoft stepped back and looked at that situation and said that the best thing for us might be to start from scratch: build a new system, focus on having a lot of the great things about Unix, a lot of the great things about Windows, and also being a file-sharing server that would have the same kind of performance that, up until that point, had been unique to Novell's Netware. And through Windows NT, you can see it throughout the design. In a weak sense, it is a form of Unix."