Twitter has announced the launch of its emergency alerts system in the United Kingdom and Ireland today, which it says will make it easier for organisations to share critical information as quickly as possible in times of crisis.

Twitter Alerts launches with the support of 57 key agencies and organisations across the U.K. and Ireland, including 47 police forces, the London Fire Brigade, the British Red Cross and CEOP (the Child Exploitation and Online Protection Centre), among others.

Starting today, these organisations will be able to reach their followers through special tweets marked with the #alert hashtag, and highlighted with an orange bell to draw attention to the urgency of the message.

Twitter users on iPhone (iOS 5.10 or higher) and Android (4.1.6 or higher) will also receive a push notification on their handsets. We have contacted Twitter to check if there are plans to extend this push notification support to owners of Windows Phones or BlackBerry devices.

All users, regardless of OS, can also sign up to receive Alerts from these accounts via SMS.

You will need to opt in to receive Alerts from each Twitter account separately by visiting its dedicated setup page at twitter.com/accountusername/alerts. You can view a full list of all participating organisations on this page.

Signing up for Alerts is a simple process; when you visit the setup page for an account, you'll be greeted with this view: 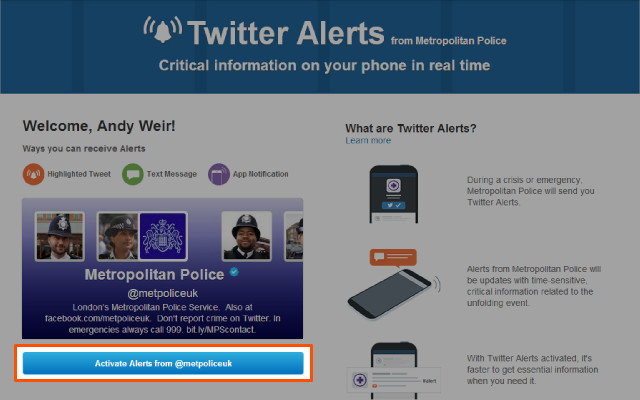 Just click on the 'Activate Alerts' link to proceed to the next step. Setting up a phone number for SMS alerts is optional; take note of Twitter's warning that "others will be able to find you Twitter by your phone number. You can change this through your account settings at any time."

You may also notice that only a small number of mobile networks are listed on the setup page. Carriers such as EE, T-Mobile, Virgin Mobile, giffgaff and many others have not been included here. It is unclear whether the operators not listed here have chosen not to participate in the Alerts programme; we have requested clarification from Twitter on this matter, and will update this article if they provide us with further details.

Organisations that have signed up to participate in Twitter Alerts in the U.K. and Ireland have welcomed the launch of the programme with open arms. Commander David Martin, who heads up emergency planning for London's Metropolitan Police Service, said: "Getting fast and accurate information to the public in a major incident or terrorist attack really could make a life-saving difference... Twitter Alerts means that our messages will stand out when it most matters."

Update: Twitter has replied to our request for further clarification on some of the details shared above, but unfortunately they have "nothing to add" to the information already included in their blog post. So if you were hoping for more information on Windows Phone or BlackBerry support, or the ability to get SMS alerts if you're not on one of the few mobile networks listed, it looks like you'll have to keep waiting for now.