Tesco is the U.K.’s largest retailer, and one of the world’s largest too, beaten only by American giant Walmart and France’s Carrefour. Roughly £1 of every £7 spent in the U.K. is spent in Tesco stores, and for many consumers, the company provides a one-stop shop for groceries, home furnishings and even electronics.

Colin Marsh was one such consumer, and he purchased an Apple iPad from his local Tesco Extra store in Whitstable, Kent, paying £470 for the device as a gift for his two daughters. But when he opened the box expecting to find a shiny new tablet inside, all he found was three lumps of clay. 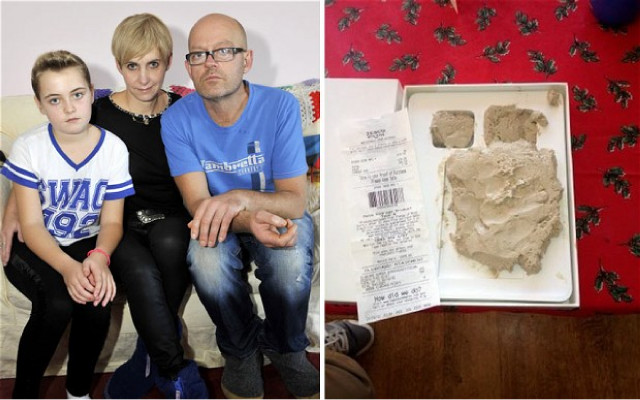 Colin Marsh with his family, and the Apple iPad box containing three lumps of clay

Marsh of course returned the box and its contents to the store to request a refund, but Tesco staff were, naturally, suspicious of his claims and reported the matter to Kent Police. Two days later, he was summoned to his local police station. Marsh told The Telegraph: “I just thought they wanted to know what had happened, but the next thing I know I’m being bundled into a cell. I was in there for three hours. It was then they told me the iPad had been activated in my name. I just thought ‘how can that possibly be?’ It didn’t make any sense.”

Arrested on suspicion of fraud, he was subsequently released on bail as the police investigation continued. It was not until seven weeks later that the missing iPad was finally located, over 200 miles away, in Wales.

Kent Police said that although “the iPad in question had apparently been registered in his name… this was investigated and as soon as it became clear that Mr Marsh had not committed any offences, his bail was cancelled and he was informed police would not be taking any further action against him.”

Marsh has since received a full refund from Tesco, but says that the retail giant has still not properly apologised to him: “You just can’t treat people like that. It’s absolutely disgusting. I’ve not even had so much as an apology from Tesco. It’s disgraceful.”

The events began last Christmas when Marsh purchased the gift for his daughters, although it is unclear why it has taken until now for the matter to become public. It is also unclear why Tesco has apparently not apologised to him directly, although the company did do so in a statement this week, saying: “We were very disappointed to learn that the product we sold to Mr Marsh had been tampered with. We would of course never knowingly have sold it to Mr Marsh and we apologise sincerely for the problems this has caused him.”