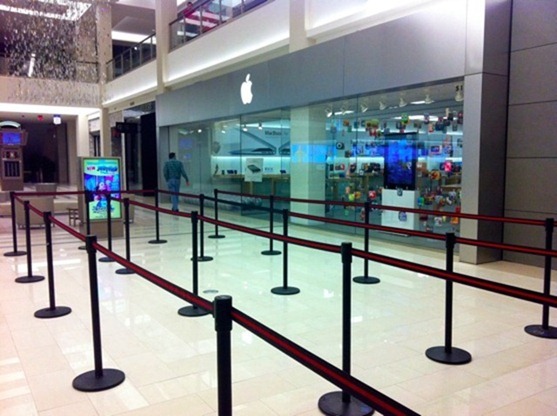 The long-awaited Verizon iPhone went on sale today to the mass public in retail stores across the United States today. Pre-orders for the phone began last week, which sold out on the first day with an estimated 250k units sold.

For the consumers that didn't get a chance to pre-order the phone through Verizon, they were able to purchase the phone starting this morning through Apple, Verizon and Best Buy. As part of the Apple tradition on welcoming the first customers into their stores, cheers began to rollout, but to an empty queue in front of the store.

When the iPhone 4 first went on sale, there were hour-long lines of eager consumers waiting to get their hands on the new device, but what happened to the Verizon iPhone launch?

At the Mall of America, the ropes were set to anticipate a few hundred people, but only two people actually showed up for the 6:30 AM launch. A sad day for Apple and Verizon, but perhaps a wonderful product launch for AT&T, who held the exclusive contract to carry the iPhone since its launch in 2007.

The Twincities.com blog managed to get some images and video of the Verizon iPhone launch: