If it's too good to be true, it probably is. Microsoft has officially sold out of the Windows 7 Home Premium Family Pack in the US. The Family Pack was a special edition that consisted of three licenses for $150. When compared to the price of a single upgrade license ($110), the Family Pack was a steal. These things sold faster than beer at a Yankees game.

When the deal was first announced, Microsoft had said that it would be a limited time offer, available while supplies lasted. The Family Pack was a major contributing factor in the success of Windows 7's launch, as the new OS broke sales records across the board, selling 234% more boxed editions than Vista in its initial release (according to NPD Group).

Being that it was such a huge hit, it would make sense for Microsoft to continue selling it. After all, Apple always sells Mac OS in family packs. For now, if you want to get your hands on one, you'll have to pay a premium (though it's still cheaper than buying individual licenses). The Windows 7 Home Premium Family Pack can be found on eBay and from third party dealers on Amazon for $220 and above.

The Family Pack is still available in other locations Worldwide, UK customers can purchase the pack from Microsoft directly at the time of writing. US shoppers buying direct from Microsoft are greeted with the message "the Windows 7 Family Pack is now sold out through many of our partners. Please check our other offers." 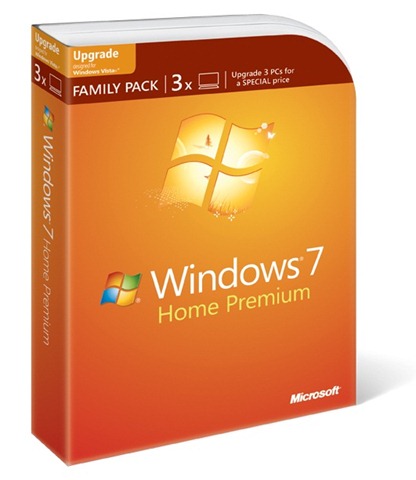