Ever since the EU decided to come down on Microsoft for their monopolistic ways, Microsoft has been trying their best to appease them. In order to settle the dispute about whether bundling Internet Explorer as Windows' default browser was fair practice, Microsoft initially proposed a browser-less OS. This solution would soon shift to a ballot screen, allowing users to select whichever browser they feel most comfortable with. Of course, this led to more complaints, as the ballot would appear in, none other than, IE itself.

A Firefox user experience designer felt that this gave Microsoft three times as much space as everyone else. Microsoft suggested that listing the browsers in alphabetical order would make the ballot fair. Other browser manufacturers, such as Opera, felt that to be a poor solution, as future browsers may name their software in a way that pushes them to the forefront of the ballot.

What was their suggested solution? Randomize the ballot according to ComputerWorld. Each time the ballot is opened, the choices would appear in a different order. With regards to the ballot loading in IE, Opera's Hakon Wium Lie, supported the idea of Microsoft disabling their security warnings for the ballot, leaving no pop-ups to question a user's decision to download and install an alternate browser.

Should it get the green light, Microsoft would then have eight weeks to roll it out to current versions of Windows in Europe. If a user currently uses IE as their default browser, the update would make their computer present the ballot next time the browser is loaded. For new PCs, the ballot would be presented the first time the owner tries accessing the Internet. The ballot could be finalized by the EU as soon as December 15th. 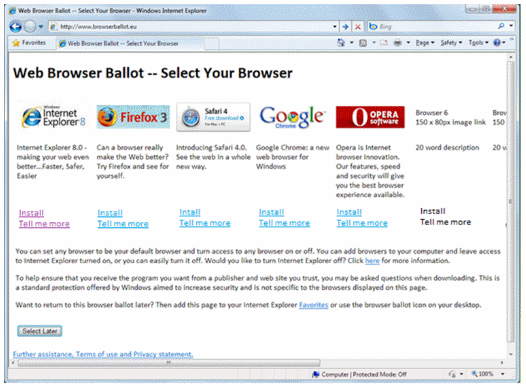