In part one of our overview of Windows 7, we looked into Federated Search. In part two, we look into the much criticized feature of Windows Vista - The User Account Control

One of the highly criticized features in Windows Vista is the User Account Control(UAC) which prompts up a dialog box seeking users' permission to continue or stop whenever a system-level change is made. The problem with Vista is that even the default user account which is created during the install, who is a protected administrator (unlike in XP where the user is an Administrator), could not bypass the UAC until its tweaked. This created lots of criticism and the feature which was built to make Vista secure became the most hated feature amongst users. Of course, this was a drastic change for Microsoft and as well as end users who were very much inclined to a single user account (till Windows XP) who is an Administrator.

One of the major complaints was that the UAC involved more clicks to execute a program when such system-level change occurred. And the other - there were only two options provided by Microsoft in Vista's Control Panel - either Turn On UAC or Turn Off UAC. Users did not have much control over the behaviour of UAC notifications.

How far has this changed in Windows 7?

When the E7 Team blogged about UAC, it was clear that Microsoft was taking the user feedback seriously about the issues and problems they currently face using UAC in Vista.

In Windows 7, Microsoft has given options for the users to select their 'comfort level' in UAC notifications and also improved the user interface by providing more relevant and additional information. The default user account created during the installation in Windows 7 is still a protected administrator but with a different UAC setting: 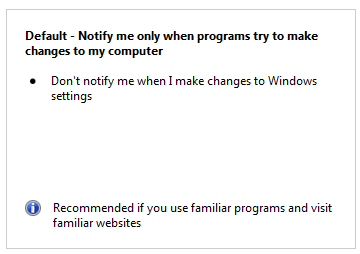 Yes, the default user would be prompted only when programs try to make changes but not the user himself.

The UAC icon has gone for a change and it looks much better now than in Vista:

Windows 7 UAC Settings has a Slider to change your 'comfort-level' with the notifications. You can choose one from the following four options: 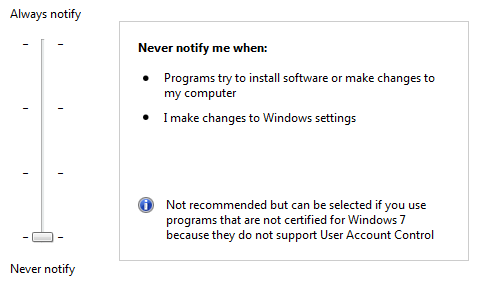 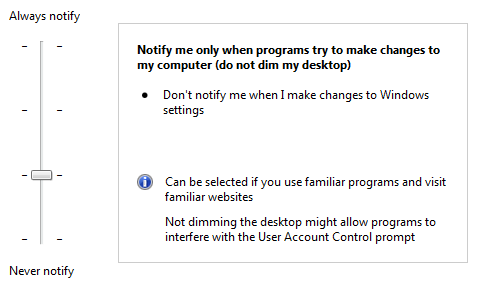 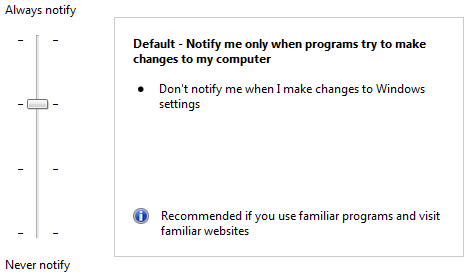 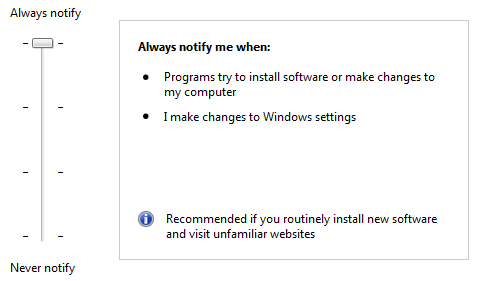 Below is a screenshot of the UAC prompt when you run an application form a known publisher: 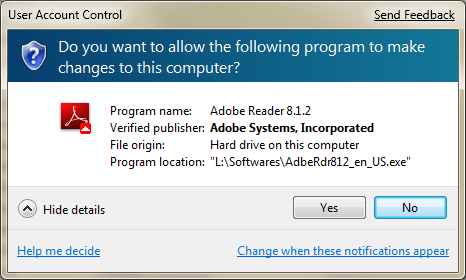 Below is a screenshot of the UAC prompt when you run an application from an unknown publisher: 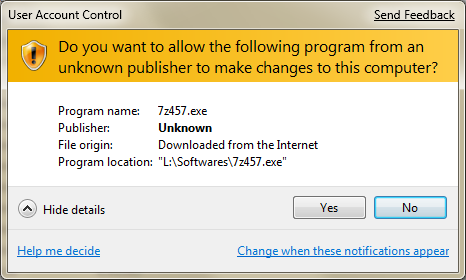 Since many software programs did not support UAC when it was first introduced in Windows Vista, the applications failed and created lots of issues, which reflected in a bad user experience. As many applications are built with the support of UAC now, it is a seamless experience in Windows 7.