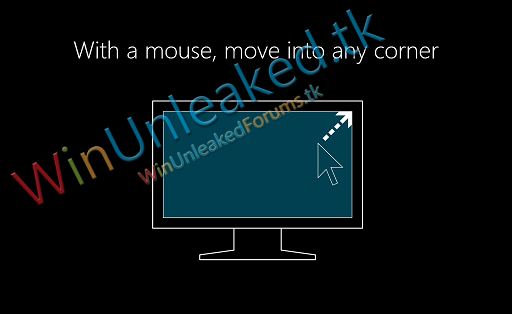 If you remember the days of Windows 95 up till XP, you will remember the tutorial that was included when you first installed the OS. Windows 8 is reviving the concept and will bring this experience back to the desktop and the first image of the tutorial has hit the web.

Posted up on the Winunleaked forums, Canouna has stated that the launch tutorial is back and it covers the basic concepts of Windows 8 that you would expect such as the hot corners and charms.

Because Windows 8 is a dramatically different experience than Windows 7, when compared to previous upgrade cycles, it is a smart move for the company to help its consumers adjust to the new layout as quickly as possible.  For those of us who have played with the Developers Preview and the Consumer Preview, we know that a Windows 8 tutorial will be critical to keeping the negative vibes away from the new Operating System when it is made available later this year.

The Windows 8 Release Preview will be released in June and will most likely include this new tutorial. Microsoft has taken bold new steps with Windows 8 and getting the consumer on board will not be an easy task. But, if we become complacent with basic layouts, we will never innovate. Microsoft is sticking its neck out with Windows 8 and hopefully it will be the right direction for the company.