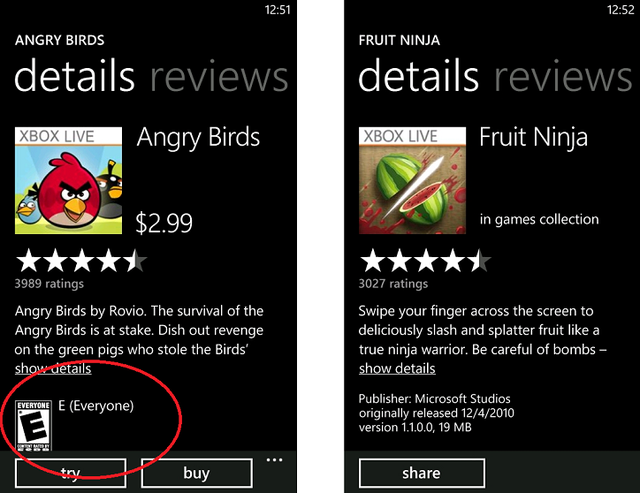 When you have a mobile operating system with downloadable games, it is always ideal to have a ratings board grade your available games. Should parents want to let their children play a game on their smartphones it stops an influx of angry messages to the company, for a start. Microsoft has realised this, as WPCentral has reported.

If you're going to let a child play a game, keeping the game within their age range can often be a good idea. Microsoft has shown off their ties to the Xbox 360 games console by incorporating the ESRB ratings  into their Marketplace. Both Google and Apple already had an age rating system on their own app stores, though they use a local concept as opposed to an agency such as the Entertainment Software Ratings Board.

The first wave of games receiving an ESRB rating have appeared on the Marketplace. As is to be expected, Angry Birds is among those games due to its phenomenal success. Despite the positives of having an age rating system in place, it may mean longer approval delays for applications, so newer developers may have to wait longer to see the fruits of their development work appearing on the system.

Microsoft's age rating system, using the ESRB, will apparently only cover the bigger games. Developers will still have to answer questionnaires to receive an automated rating for their game. This all points to the possibility that Microsoft is looking only for games that could fit a wide audience. Developers working on apps for the WP7 operating system may need to be prepared for future setbacks in their app approvals.