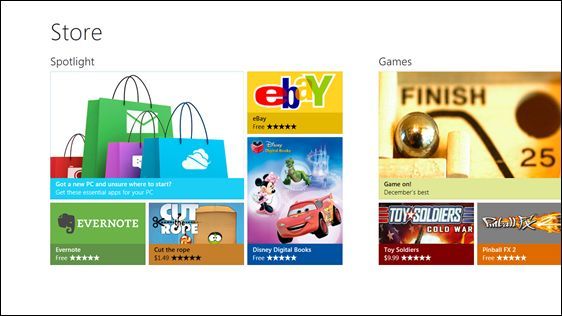 Just like Microsoft did when it started promoting Windows 8, the company has now launched an official developers blog for the new Windows Store feature that is being included in Microsoft's next operating system. In the first entry, Ted Dworkin, the Partner Program Manager for the Microsoft Store, reveals more info about the app marketplace that's being embedded inside Windows 8.

One thing that Microsoft wanted to do when designing the user interface for the Microsoft store is to make it easy to find and discover new and cool apps. As Dworkin explains:

We designed the landing page to push compelling apps to the surface. We use categories to help organize the apps—the latest, most popular, and fast rising apps all have dedicated lists surfaced here. You’ll see personalized app recommendations and also topic pages that promote apps related to editorial themes, helping surface what would otherwise be hidden gems. Navigation is simple and consistent with the model of Windows 8. Built-in search supports directed discovery, fluid panning moves you through the categories, and category filters help locate the most relevant apps.

Microsoft has already revealed that apps in the the Microsoft Store will be able to be found in web browser search engines. However, app creators can actually promote their creations in the Windows Store directly via Internet Explorer 10, which will also be included in Windows 8. Dworkin says, "With just a line of markup, your website promotes your app via the app button within the browser, visible to anyone running Internet Explorer 10 on Windows 8. The app button on a Windows 8 PC takes you to the app listing in the Store or directly to the app, if it’s installed." 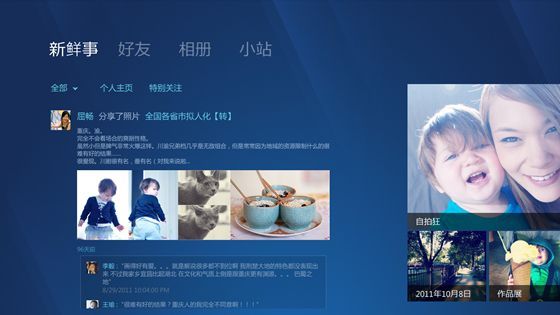 Because Windows 8 and the Windows Store feature will be made available worldwide, Microsoft will let specific territories develop their own versions of the Windows Store design as well as their own apps. Dworkin says, "Even though the Windows Store isn’t available yet, the talented developers at Renren—a popular social network in China—have created a rich, Metro style app in XAML and C# that is tailored to their customers and a delight to use."

Enterprise customers will also be able to use the Windows Store to release programs that can be accessed only by a particular company's employees. Dworkin says:

In addition, enterprises can choose to deploy Metro style apps directly to PCs, without going through the Store infrastructure. For Windows 8 Beta, IT administrators can use group policy to permit Metro style app installations, as long as the apps are signed by trusted publishers and the machines are joined to the domain. Then the IT admin can use powershell commandlets to manage those Metro-style apps on Windows 8.

The blog entry also goes into more detail about how app developers can make Windows Store-based apps use alternative revenue streams. For example developers will be able to offer users a free trial for a game via Windows Store. If they want to play a few more levels, gamers can pay directly from the game to get those extra levels without having to download a second version of the game or patching the first game. Drowkin says, "Our Store licensing service will help protect the intellectual property of each Metro style app developer. This will help provide a consistent experience for customers and also allows for additional features, such as app roaming." 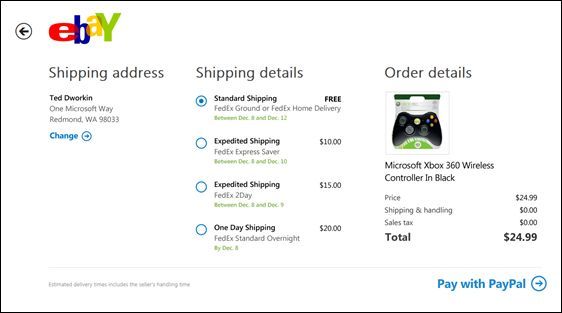 Third party transactions will also be supported for Windows Store, including alternative forms of payment. The eBay Windows Store app is an example of that. People who use it will be able to purchase items via the app using the Paypal service, a popular choice for eBay shoppers. Dworkin takes a bit of a pot shot at Apple's App Store, which no longer allows third party transaction services for its app, saying, "Marketplaces that limit transaction choices can constrain certain models."

Microsoft has already announced that it will take 30 percent of the revenues of any app sold on the Microsoft Store at first. The company will drop that number down to 20 percent after the app earns over $25,000 in downloads and/or in in-app revenues. In addition, the Windows Store blog site adds that Microsoft will also charge a $49 one time registration for individuals. For companies, the one time registration fee goes up to $99.