According to APC, it looks like Windows Mobile 6.x users won't be getting the Windows Phone 7 Series anytime soon. In order to run WP7S on a phone, the device must have three buttons (back, start, and search). But what happens when a phone has more than three buttons, as is the case with the HD2? According to Natasha Kwan, the General Manager for Microsoft's Mobile Communications Business in the Asia-Pacific region, the powerful HD2 "doesn't qualify because it doesn't have the three buttons." In addition, Business Operations Director for Microsoft Australia, Tony Wilkinson, says there's more to it than just buttons. "There are some hardware components that the HD doesn't have."

It's unclear which hardware the HD2 is missing. Last time we checked, the HD2 was rockin' some pretty powerful specs. Surely it should be able to handle WP7S. APC suggests that the new OS may require "a pixel-pushing graphics chip"--something the HD2 is apparently missing. However, MobileTechWorld says that HTC has yet to rule out upgrading the HD2 to WP7S, stating that the phone is fully capable of running the new OS. The consensus seems to be--you'll find out at MIX. Rest assured, Neowin will be there to report back.

So, assuming the HD2's hardware is sufficient, the only problem would seemingly be the buttons. This begs the question: aren't five buttons better than three? The obvious answer would be "yes." Why would having too many buttons be detrimental to a phone's ability to run an OS? Until MIX, this tweet is all we're getting: 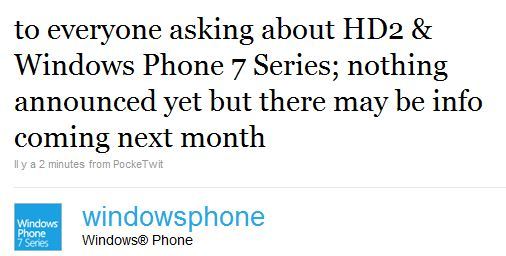