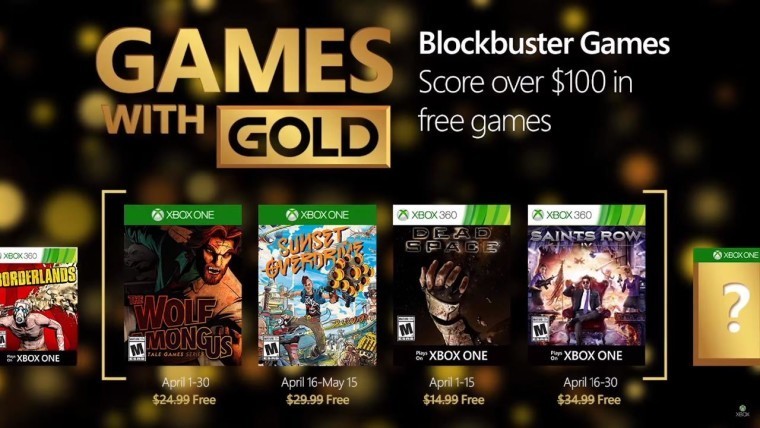 There's only one week left in March, so if you haven't had a chance to nab this month's Games with Gold titles then you should be jumping on to your Xbox One/Xbox 360 console and getting those free games while you can. As we wind down this month we've been given a look ahead to the games that will be free to Gold subscribers starting April 1, and the freebies look extra-good this month.

The Wolf Among Us (Xbox One) - Telltale Games' adaptation of Bill Willingham's Fables comic book series comes to life, putting players into the shoes of Bigby Wolf, the Sheriff of Fabletown. The Wolf Among Us is a story-driven game that spans five episodes. You can get this game starting April 1 and will be available the entire month of April.

Sunset Overdrive (Xbox One) - From the creators of Ratchet & Clank comes a third-person shooter that looks like someone shoved zombies and comic book theme parks into Tony Hawk's Pro Skater. Fans of outside-the-box creativity will find a lot to love about Sunset Overdrive's zany open world setting. You'll be able to download Sunset Overdrive starting April 16 and will be available until May 15.

Dead Space (Xbox 360/Xbox One) - If you found the 90s horror film Event Horizon intriguing then you'll want to jump in with Dead Space - a survival-horror game set in deep space on a mining vessel where you will battle reanimated humans. The game was met with widespread critical acclaim and spawned two sequels so, if you're wanting to raise a few hairs on the back of your neck, you'll be able to download Dead Space from April 1 through April 15.

Saints Row IV (Xbox 360/Xbox One) - Take control of the Saints street gang in the fourth iteration of the Saints Row series. The game is open-world and draws a lot of comparisons to the popular Grand Theft Auto series while also parodying a lot of pop culture as players progress through the main story. Saints Row IV will be available from April 16 to April 30.