The list of manufacturers offering Windows Phones remains modest, especially compared with the vast numbers of OEMs offering Android handsets. While Nokia, HTC, Samsung and Huawei continue to offer devices with Microsoft's mobile OS, brands such as Dell and LG - which originally offered WP7 handsets - have since dropped the platform to focus on other areas.

Another brand that previously offered Windows Phones is Acer, which launched its last such handset, the Allegro (also known as the W4 or M310), with the Mango update, all the way back in late 2011. Since then, the company has focused exclusively on its Android handsets, but Tweakers.net reports that Acer is now planning to return to Windows Phone. 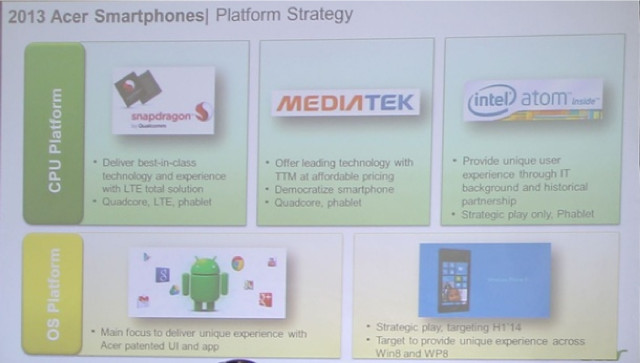 They were present at an Acer event at which the above slide was shown, and while Acer makes it clear that its primary focus remains Android, adding Windows Phone to its portfolio is described as a "strategic play". It's likely that the company is hedging its bets in the face of fierce competition from the likes of Samsung, which dominates Android market share; keeping all of its eggs in the Android basket may be seen as an unwise move.

Acer evidently also sees some value in being able to cross-promote Windows Phone alongside Windows 8; the slide states that the company aims "to provide [a] unique experience across Win8 and WP8". Acer recently announced the first 8-inch Windows 8 tablet, the Iconia W3, which will include a version of Office 2013.

Whether Acer is planning a single new Windows Phone or a family of devices remains unclear, but either way, there's still a heck of a wait ahead, with a launch targeted for the first half of 2014.

Source and image: Tweakers.net | via WMPowerUser