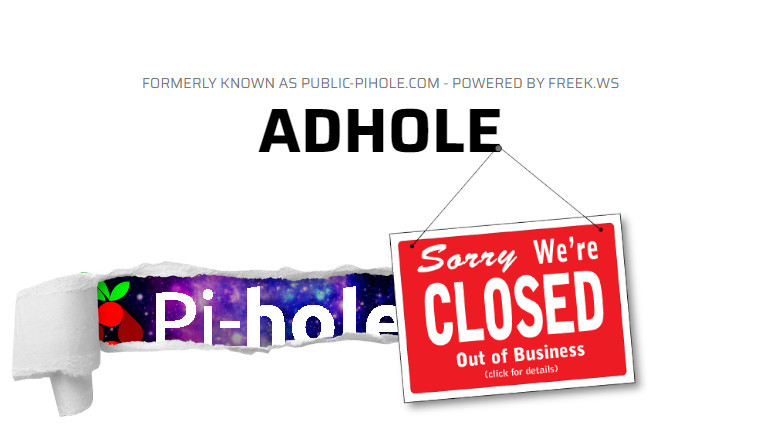 Privacy advocates already know, but for the uninitiated, Pi-hole is a DNS server you can place in front of an Internet DNS server to filter ads from your browsing and streaming services. It’s capable of removing ads from all clients on a network and can even remove ads from YouTube videos and free video streaming services. Set up is trivial if you have a spare Raspberry Pi (or any other spare hardware), and it runs great in containers like Docker, too.

Since 2017, those not so savvy who still wanted the experience of Pi-hole, could turn to Adhole.org. That is, until now. Adhole.org is shutting down, citing issues with maintenance and stability. From the announcement:

What started as a small single-node Pi-hole instance on a public VPS back in 2017, grew out to become a worldwide multi-node adblocking DNS network with thousands of concurrent users around the globe… but that also meant more server load, which meant upgrading servers, more incident (reports) and as such more work. In other words; the project has become a victim of its own success. The current setup is pestered with continuous stability issues along with (recently introduced) certificate issues and repeatedly changing IP addresses. And since no-one likes an unstable DNS, because as all sysadmins know; ‘it’s always DNS’, I decided to pull the plug.

For those who still want to set up a Pi-hole server and want to see what all the fuss is about, check out these discussions on our forums.