Amazon has launched a new design for the Alexa app, promising a more personalized user experience and giving first-party features a prominent place on the home screen. By doing so, some third-party skill suggestions have been put on the backburner.

Before, the Alexa button used to sit at the bottom center of the home screen. The updated Alexa app now moves that dedicated button to the top of the screen where the date and weather updates were previously situated. The redesign makes it easier to see the button first when you open the digital assistant's mobile app. In addition, you can simply say "Alexa" to activate it hands-free. 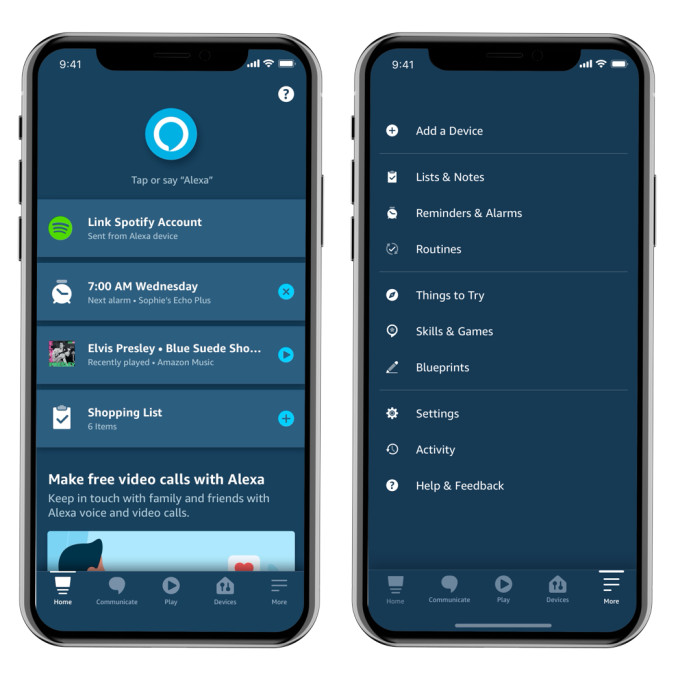 The navigation bar has also received a makeover. For example, the "More" button is now found at the bottom right corner, giving you quick access to features such as Reminders, Routines, Skills, and, Settings. The center of the navigation bar is also occupied by the "Play" button as part of the redesign to give you a faster way of launching media playback.

The main screen now displays personalized suggestions based on how you use Alexa. For example, if you use the digital assistant to play music most of the time, you’ll now see that command front and center. You can also view controls for currently active features like the volume level adjustment for the Echo devices. On the other hand, if it's your first time using the app, you will see suggestions on the basic way of using Alexa including other Amazon services such as Music or its shopping list.

Amazon says the updated app will be available to everyone over the next month. Supported platforms include iOS, Android, and Fire OS devices.