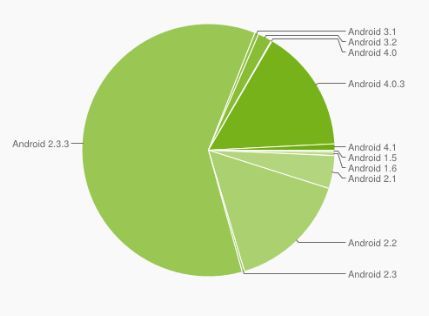 In July, Google showed that Android 4.0 (Ice Cream Sandwich) was installed on 10.9 percent of all Android devices. In the company's latest Android distribution update, Google revealed even more gains for Android 4.0, even though the company just announced the launch of Android 4.1 (Jelly Bean) a few weeks earlier.

While Android 2.3 (Gingerbread) is still installed on the majority of Android-based products, its market share is slipping. This month's update shows it now occupies 60.6 percent of Android devices. That compares to 64 percent in July and 70 percent in June.

The tablet-only Android 3.1-3.2 (Honeycomb) is only installed on 2.3 percent of all Android devices. The old Android 2.2 (Froyo) is still hanging in there. It's installed on 15.5 percent of Android products.

It's likely that the market share of Android 4.0 could be impacted if a lot of their devices make the upgrade to Android 4.1 in the weeks and months ahead.