It's been almost ten months since Apple launched the last major update to its mobile operating system, but today, at its Worldwide Developer Conference, the company announced the next version: iOS 9.

Apple said that it has worked to improve many aspects of the user experience, including extending battery life, boosting device performance and enhancing security.

But a major component of Apple's improvements in iOS 9 come in the form of changes to Siri, which features many of the enhancements that had recently been rumored as part of the company's Proactive program.

The aim, Apple says, is to boost the 'intelligence' of each iOS device - and in practice, it seems that this partly involves introducing various features that have previously been seen in the Google Now and Microsoft Cortana assistants.

Siri will now 'learn' more about you over time - for example, if you usually go for a run in the morning, your iPhone will understand that that's a regular part of your day. Simply plug in your headset in the morning, and the phone will immediately switch to the 'now playing' music view so you can get your tunes lined up for your run.

Siri can now automatically add items to your calendar too, and provide traffic updates and prompt you when to leave for an appointment.

Another example of Apple's more 'intelligent' approach to its OS is that when an unidentified number calls you, your iPhone will attempt to track down the identity of that number, and give you its best suggestion. Apple seems to be proud of the new more intelligent search features baked into the OS, which includes better understanding of context in natural language usage.

But Apple is keen to emphasize that while it's focused on improving usability, it's doing so without compromising users' security or privacy. Indeed, the company made a point of highlighting that it doesn't scan users' emails, photos or other data to mine information about them - a clear dig at Google - and emphasized that users remain firmly in control of their data and privacy with this new deeper Siri and search integration.

There are other improvements too, including the addition of reward cards to Apple Pay. Passbook has been renamed 'Wallet', and will be a unified hub for all credit, debit and reward cards. Search cards for retail locations, restaurants and other places of interest will now highlight those venues that accept Apple Pay more clearly.

An updated version of Apple Notes is on the way too with various new features, and there are improvements for Apple Maps as well, including the addition of public transit support in numerous major cities around the world. 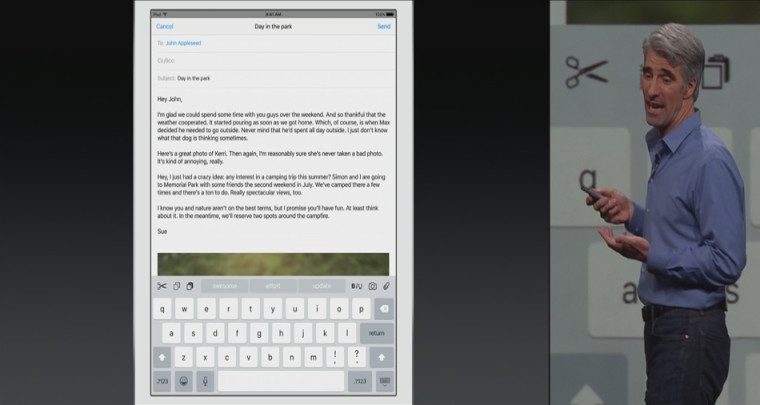 In iOS 9, the touch keyboard now includes cut/copy-and-paste shortcuts, and also supports a double-finger touch which turns the keyboard into a giant mousepad of sorts, making it easier to move the text cursor around to the desired location when typing in documents.

But perhaps more significantly, Apple is introducing new multitasking features - and for that, it's borrowing heavily from the Snap feature that Microsoft first introduced with Windows 8. In fact, aside from the actual visuals, conceptually, it seems virtually identical to Microsoft's Snap. However, this 'split view' will only be available on the range-topping iPad Air 2.

But Apple's implementation goes even further, for example with picture-in-picture support. Some of these multitasking features will be available across iPads and iPhones, but not all features will work on every iOS device.

There's also a new 'low-power' mode in iOS, which Apple says can extend battery life by up to three hours. 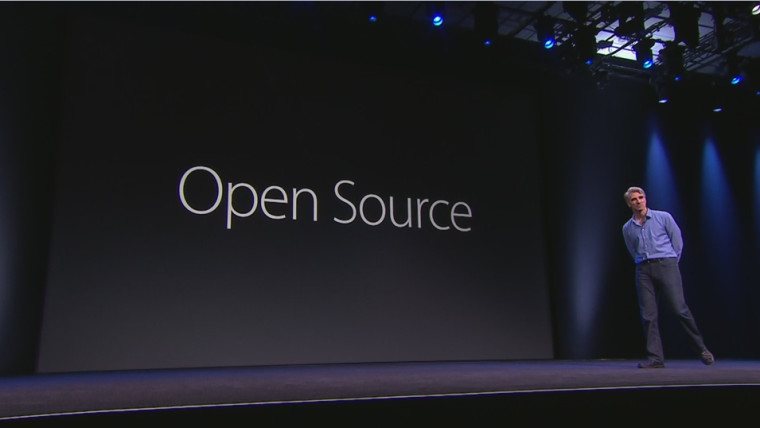 And in one further significant announcement, Apple has announced that it is making its Swift 2 programming language open source.

The company says that it's performed major enhancements for the update process, which will dramatically reduce the size of the update for those who have to download it, down from 4.6GB for iOS 8 to just 1.3GB for iOS 9.

Apple will be releasing the first preview of iOS 9 in July, and will be rolling out to end users sometime this fall.