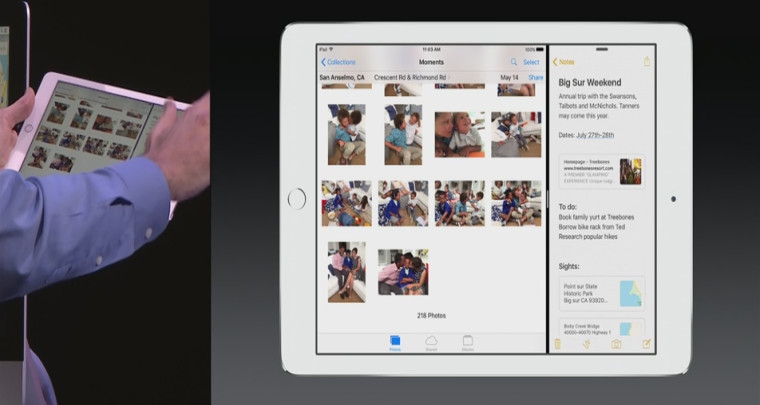 "The big one", as described by Apple's SVP of Software Engineering Craig Federighi, is iOS 9's support for true multitasking on the iPad. Side-by-side loading of apps has been one of the most highly requested features for iOS. Up until now, the iPad has kept apps running in the background and only given users the option to switch apps by double tapping the home button. 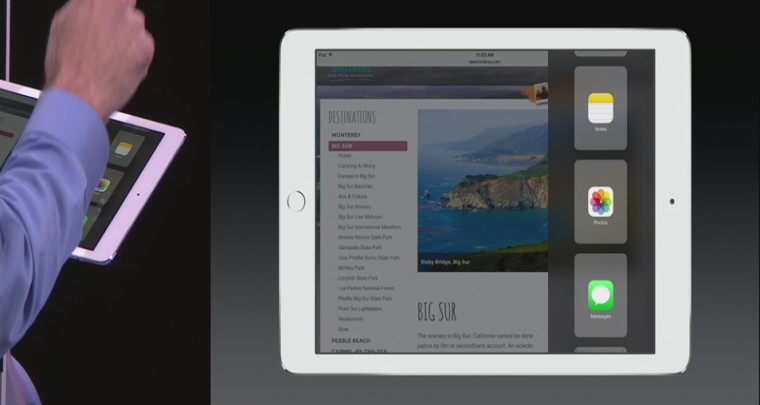 With iOS 9, Apple has introduced a new app switcher interface with the ability to run two apps simultaneous in a 50/50 or 70/30 configuration. If you have used Windows 8, the new multitasking interface is going to feel very familiar. Like Windows 8, iOS features a bar in the middle separating the apps, allowing the user to change the size ratio.

Users can also bring up a list of active apps and switch apps from the 'SlideOver' menu, activated by swiping in from the right, a feature also curiously similar to swiping in from the left side to show active apps for Windows 8 users. Unlike Windows 8 however, with multitasking in iOS users will be able to drag and drop items between snapped apps. For example, a user could snap the photos app alongside the mail app and drag photos into the mail app to add them to the email.

Borrowing of features is a relatively common thing to see now days. With Windows 10, Microsoft added a Notification Center that can be brought in from the ride side of the desktop, much like Apple's own notification center in OS X that came before it. Though it may resemble multitasking in Windows 8, the addition isn't surprising and is still welcomed as many power users of iOS have been pushing for multitasking on the iPad since its early days. You can read more about the details of iOS 9 here.