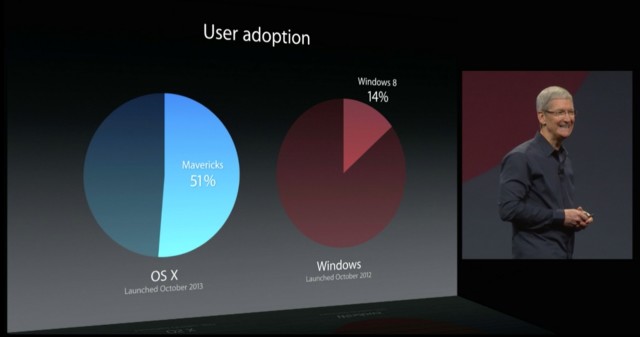 Apple has never been shy about tossing a bit of mud towards Microsoft and the WWDC 2014 keynote was no different with Tim Cook talking down about Windows 8. What was the reason for the smearing this year? The target of his ridicule was the operating system's adoption rate.

Specifically, Mavericks is now on 51% of machines while Windows 8 is only on 14% of Windows machines. While the comparison looks good from a marketing perspective, the facts behind the figures don't really paint as pretty of a picture.

Based on the adoption rate of Mavericks, Apple claims that this is the fastest adopted rate for any OS, ever. That assessment is clearly based solely as a percentage of updates versus the installed user base, not the actual number of users who have downloaded the OS. Based on a user view, not a percentage view, Microsoft would still hold the crown for user adoption rates for new platforms.

Apple loves to skew the facts with statistics but that is nothing new, they have been using this trick for years and they show no signs of stopping in the face of reality.

Of course, the enterprise is a big portion of Microsoft's Windows install base and those users are extremely slow at adopting new platforms such as Windows 8. Seeing that OS X is primarily a consumer platform, the rate at which users choose to update should not surprise anyone.