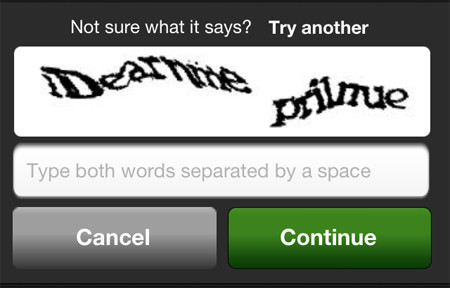 You may not know it by the name, but it has probably irritated you in the past.

CAPTCHA technology, which is often used by websites to distinguish humans and computers apart, is under scrutiny as a petition to abolish the software has gained almost 1000 signatures. The test requires the user to type the series of letters and numbers of a distorted image on the screen, in order to separate human users from automated bots, in an effort to potentially reduce spam.

However, it seems that automatic bots are not the only thing that the program disallows access to.

Wayne Hawkins, a visually impaired Australian man, has started a petition to "kill" CAPTCHA under the claim that it is discriminatory as it is inaccessible to the blind and impaired.

They’re frustrating for all internet users, but for me and millions of other people who are blind or vision impaired, CAPTCHA tests prevent us from engaging on the web and accessing online government services, because they can't be read by screen reading software.

In an open letter addressed to various CEO’s, such as Larry Page (Google) and Mark Zuckerberg (Facebook), Hawkins pleads for other alternatives that would mean the blind would not have to spend “hours trying to complete a simple task such as creating an email account”.

Hawkins hopes the petition will inspire companies to consider alternative methods of verification, such as a simple “email activation link”, to make the internet more accessible for everyone.